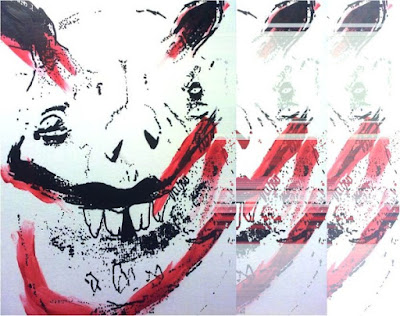 Now to the small matter of a truly international Manchester record label: one leg in this city and the other leg in Dubai.

Borland and From The Kites Of San Quentin have released a split 12" full of giddy ambience and beats that are snappier than crocodiles playing card games. More about the music in a moment: allow me for a second to literally judge a record by its cover...

Gulf Records is a collaboration between local boy Rob Gregg out of prog bleepers Borland and Daniel Fogg, who was single-handedly responsible for getting me into Lorn.

Although an equal collaboration between the two, Fogg is currently living it large on the Arabian Peninsula, so Gregg is hot-footing it around record shops with trouser pockets full of vinyl.

Yes, vinyl. Their debut release comes on a beautiful slab of vinyl, its cover adorned with the psycho Donnie Darko rabbit (my mutilated version can be seen above). I went to the launch at Centro recently, and it was truly a pleasure to get something heavy and touchable slapped into my hand (stop it) rather than a piddling little CD or a URL to a streaming site.

Each cover is hand-daubed with red paint, with copies available at the Japanchester charity gig boasting Japanese-style red circles on the back. It's good to see Gulf Records 'getting' vinyl.

As for the music, what we have is Chet Beaverbrooke by From The Kites Of San Quentin, which is a 'ladies and gentlemen we are floating in space' ambient psych-out with Billie-Holiday-on-heroin vocals.

It settles itself somewhere near chill-out (splutter, wash my mouth out), but being of an older school, the trippy spoken word drops remind me of The Orb. The disgustingly dirty bass that lands at around the three and a half minute mark suggests this is a beast of a much darker pelt.

Clockmen by Borland spits a growling melodic progression onto the floor of witch house then slurps it up with a hefty dose of melancholy. That track is ripped into seven shards of bad boy on the b-side as each artist remixes the other. Borland's take on the Kites track is the closest the 12" gets to a head-nodder, with its flip-book snare adding crunch to a delicious overdose of shimmering effects.

Chet Beaverbrooke / Clockmen is a bold debut, is difficult to categorise despite other reviewers' unconvincing comparisons to Four Tet, and is lovely to slap in your hand. I suggest you buy yourself one now: what better treat for Easter weekend than a psycho bunny?

Email ThisBlogThis!Share to TwitterShare to FacebookShare to Pinterest
Read more on: 2011 single releases, borland, four tet, from the kites of san quentin, lorn, the orb