Falty DL's been building something in his garage 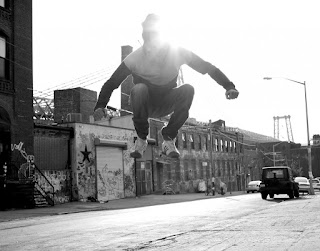 I've been juggling three records with my many eared-tentacles of music appreciation. But I only want to talk about one, which is Falty DL's You Stand Uncertain.

Much has been made of DL's genre-slurping production skills, taking in two decades of dance music. It does genre-hop, but mainly in one one spot: UK garage. Let's get this clear: the new Falty DL album is a garage record. Garage. Not techno. Not bass music. It's garage.

You can bang on all you want about dubstep, post-dubstep and chilldubwavestep, but just take its lead track Brazil featuring Lily MacKenzie: it's proper UK garage. That's garage. It's a word you won't have seen on a blog for about 46 years.

You Stand Uncertain is Planet Mu's most notable release this year so far (although Boxcutter's got some interesting stuff on the way), and it is Mr Falty's follow-up album to his debut platter Love Is A Liability. The big female vocal choons on the album, such as Gospel Of Opal, seem to be a statement. It's Falty pinning up a six-foot banner emblazoned with the phrase I'M BACK.

Onto the outside of his garage.

There are many tools in his garage, though. Open Space is a good example of the variance on offer here: it lurches from tingling fairy techno to dark, low-hung rave (a tendency even more obviously splashed over the playful Lucky Luciano).

And I'm deeply in love with the early-Grid snare clickiness on The Pacifist. He's got that retro feel yet again.

You Stand Uncertain is an impressive achievement and, for my money, sets the standard more so than another one of the three records I'm hammering at the moment, namely James Blake's eponymous and ubiquitous debut album.


The third one? It's not an electronica record, so I can't mention it. All I can tell you is she has the same name as an invisible rabbit and she sings about England.

Too right. It's like a rave in Superman's ice cave.