Totally gay for Scouting For Girls 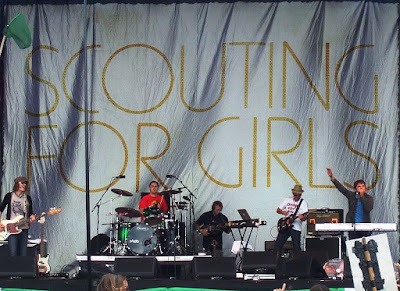 The apparent theft of Scouting For Girls' official Twitter site has had one unforeseen consequence that raises serious questions about the role of social media and pop music.

- working on some more shit tunes.

- Oops... turns out Elvis IS dead. Let us know of factual innacuracies in our other songs and we'll write (irritating) corrected versions.

- Robbie WIlliams showed that anyone can rap well. We'e thinking of giving it a bash for our next single. Rap-a-rap-rap! Word!

- just off to the toilet. One of us is going for a wee - the other 2 are going poo-poos. See if you can guess who!

- time UP! the one in the hat went for the wee, whatever his name is.

- just to let you know, Danny Dyer will be the warm up DJ for our next tour. pwopa nawtee!

A quick, um, scout of the internet shows @SFGOfficial being pimped by the funk-dribbling piano fops for some time, but it seems they never got round to registering the Twitter account.

And so a wag by the name of Chappers took up the name and started tweeting as Scouting For Girls. The tweets fed automatically to the group's website. They were funny. A (very) small segment of pop history was made.

Chappers, a web-head and occasional DJ based quite near me in Stockport, was quick to offer the account back to the group's management. They grumpily referred the matter to Sony, while the band themselves seemed to take it on the chin.

The 'Girls said on their own Twitter account: "Thank you to everyone who complained when out twitter account got hacked into! Just seen it. Quite funny - fairplay!"  Although it should be pointed out, the account wasn't hacked and was simply the result of a slip in web design by their record company.

All very well and fluffy. No harm done. Everyone had a giggle at the expense of an awful band. Except this whole fandango has had a much more dire consequence that anyone had imagined. This will have repercussions way beyond what happened over five hours yesterday.

It means I am now following Scouting For Girls on Twitter.

The moment Chappers handed SFGOfficial back to the band's management, I suddenly found myself as an official fanboy of Scouting For Girls.

I have never followed an awful band on Twitter. 7,000 tweets and two years into my Twitter career, and this has ruined me. I am following Scouting For Girls.

This fact cannot be denied.

I've had to buy into the 'Girls. I am their follower, after all. I've bought t-shirts. I've bought all the singles. I've listened to far too much Ben Folds Five. I am now TGFSFG: Totally Gay For Scouting For Girls.

It has left me in a world of Topman jackets, sensible fonts and Jamiroquai posters. I now like to hear the lyrics in a pop song. A good melody. I don't even like Aphex Twin any more. I mean, it's just noise, isn't it?

Everything's changing, as Keane would say. Chappers is pop music's evil nemesis, while I am a brain-dead fanboy. The whole balance of music has tilted, and all because Scouting For Girls had the indecency to be crap in the first place.

"Everything's changing, as Keane would say"

Oh, damn. You got me there. Curses.

You fell for my evil trap! Mwahahahahaha!

They say confession is good for the soul, (who on earth are 'they' anyway?), but I'm not sure about this context. Oh well, your forgiven my son!

I am truly blessed.

Or drunk. One of the two.