The Stone Roses and the seriously stained alley of nostalgia 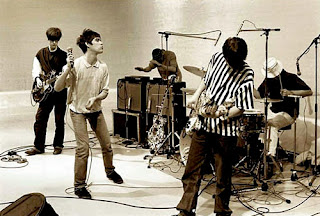 Edit: I was clearly way off the mark in this piece. Here are my 2016 reflections on the new Stone Roses single.

In fact, Manchester does nostalgia almost as well as Liverpool, what with reformations by the likes of James, M People and, um, Northside. When in fact what we really want back are our dearly deceased, such as Joy Division, Frank Sidebottom and Together.

What we didn't need, though, was another trip down a syringe-ridden nostalgia alley. We'd just end up vomiting into our navals and using our hoody to wipe up the sick, thereby creating an ironically-pleasing hypercolour design on our clothing. How on earth can they recapture the Bez days of our lives? Stand in Harvey Nicks and pretend it's the Hacienda? No, thanks.

The rumours were quashed pretty quickly. Many commentators took a (private) post-funeral piss-up between ex-band members as genuine news. But Mani himself gave a journalist a right old ear-pummelling about the rumours, ending his rant with "It isn't true and isn't happening."


See also: How do you solve a problem like Madchester?

"the Stone Roses will not come again"

So the Stone Roses are not the resurrection and the life?

They wanna be adored, but fate shot them down. (I was quite tempted to write an answer containing references to all the tracks from their debut album, but I think that would have hurt my brain too much.)

The Roses were amateurs. They couldn't even paint a record company office properly.