And on that bombshell, Venetian Snares is back 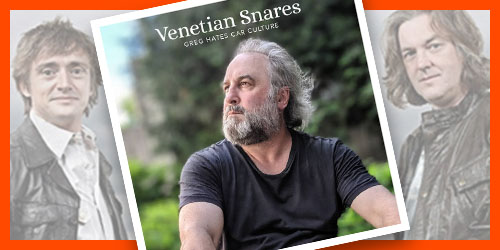 Venetian Snares. Remember him? He is responsible for drill 'n' bass, otherwise known as music for people who enjoy shoving woodpeckers in their ears. But in a good way.

December sees the release of Greg Hates Car Culture, which was his first release on vinyl back in 1999, a year in which no-one listened to any music because they were too busy running through the streets to escape the Millennium Bug.

Who is Greg? What's he got against cars? He sounds like the kind of guy who likes Top Gear, or Clarkson's Petrol-Drenched Circle Jerk or whatever it's called now.

I've listened to the album with both of my ears, and you'll have to subscribe to Electronic Sound to know my full thoughts. But I can tell you it has a superb John Goodman sample from The Big Lebowski. If you look at the track listing, it's pretty clear which track it is. Dude.

Back in my clubbing days, the way to suss out the coolness of someone else's music taste was to lean in and say "do you like Venetian Snares?" Comedy fans do a similar thing using Stewart Lee or Daniel Kitson.

If someone said yes, you could totes be BFFs (assuming BFF meant "Breakcore Fans Forever"). But if you just got a shrug in response, it was acceptable to excommunicate them from your life or throw them out of a window, whichever was easier.

And on that bombshell, here's a squirrel racing a jet-ski in a wheelbarrow. That's the kind of thing they do, right?

Email ThisBlogThis!Share to TwitterShare to FacebookShare to Pinterest
Read more on: venetian snares