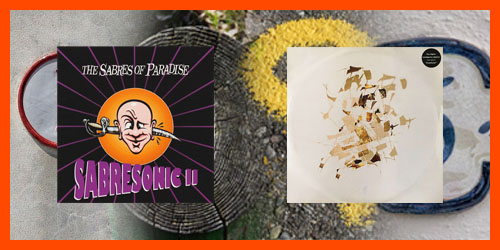 This is round one of the battle to find the best electronic music album of 1995, as voted for by me and me alone. See all the riders and runners here.

A random number generator has picked the first two contestants. They are:


Sabresonic 2 by Sabres of Paradise
Freefloater by Higher Intelligence Agency

Winner gets through to the quarter-finals. Let's go to war!

Great question, Fats. This is a pretty easy one. There's much to admire in the icy filters of the Higher Intelligence Agency's second album, following their brilliant debut Colourform and an impressive showing in the Artificial Intelligence series. But it's not very biscuity. If it was a foodstuff, it would be sour sweets or sprinkles, or that dry ice crap posh restaurants cover tables with. Andrew Weatherall's Sabresonic 2 is so tribal and earthy, you'd almost certainly throw it into a biscuit mix.
Winner: Sabresonic 2

Ah. We have a problem here. Higher Intelligence Agency were never really about the massive tunes: it was more a soundtrack to which you could wheelbarrow a load of drugs down your gullet. And although Sabres arguably have more tunes, this second album is really just a remix of debut album Sabresonic. So the tunes are mostly not original: in fact, it's barely an album at all and shouldn't be on this list. Sssshhh. Don't tell anyone. By definition, the other album has more tunes.
Winner: Freefloater

Let's look at Sabres first. "Smokebelch" sounds like a disgusting hippo that you regret inviting around for tea, while "Inter-Lergen-Ten-ko" could be the name of an alien animal from a distant moon. Now let's look at HIA. Oh my. It has "Fleagle" and "Skank" and "Tortoise" and "Ting" and "Pinkgreen" and "Taz". If that's not a hilarious Netflix special starring subversive woodland creatures, then I'll eat my squirrel-skin hat.
Winner: Freefloater

In giving a motivational speech to his newly-appointed apostles, Jesus said: "Do not suppose that I have come to bring peace to the earth. I did not come to bring peace, but a sword." An easy win for the Sabres there.
Winner: Sabresonic 2

On Sabres' Return Of Carter, I could only do "eeeeeggs, eeeeeggs, eeeeeeeggs", while on Edge 6 I could sing "I like eggs, the special eggs" in a really catchy way. I couldn't do much with Smokebelch II. All I could with HIA's Elapse was repeatedly sing "benedict, benedict", and as for the rest of the album, it was so squiggly, it just put me off eggs. I wonder if the ambient dub scene just wasn't that into eggs.
Winner: Sabresonic 2

Some final criteria chosen with the help of Wikipedia's random article button. A better album for flipping pancakes to: HIA because it sounds so airy. A better album for waking up Ann Widdecombe in the middle of the night to: definitely Sabres. The album that sounds most like echoes from an abandoned Albanian TV station: HIA because it sounds like satellites. An album for spies: Higher Intelligence Agency, of course: the clues in the name. A better album for drowning out 'iMammy (Batteries Not Included)', which is the hilarious title of season two episode three of the award-winning sitcom Mrs Browns Boys: Sabres of Paradise all the way.
Winner: Freefloater

Overall winner and going through to the quarter-finals: Freefloater by Higher Intelligence Agency. Perhaps a surprise and also a shame considering the recent news about Sabres' Andy Weatherall, but perhaps if it had been the original Sabresonic album, it would have been a different result. HIA go through.

Using the same criteria (apart from the miscellaneous choices), witness another first round contest in the next day or two. See all the riders and runners here.

Email ThisBlogThis!Share to TwitterShare to FacebookShare to Pinterest
Read more on: best albums of 1995, higher intelligence agency, sabres of paradise