Best electronic music albums of 1995: Goldie versus the Chemical Brothers 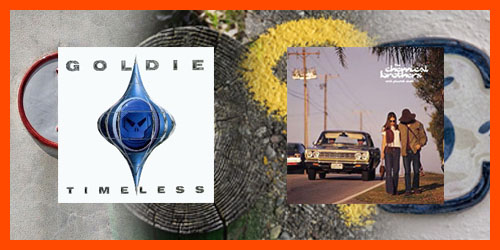 Here is the second round of my all-singing all-dancing contest to find the best electronic music album of 1995. See the series so far here, and see all 16 featured albums here.

A random number generator tells me the next two contestants are:


Timeless by Goldie
Exit Planet Dust by The Chemical Brothers

Lawks. Only one can get through to the quarter-finals. Fire up the chainsaws!

Here we have two critically acclaimed debut albums released within a month of each other in 1995, each one a shining example in its field. But which one goes better with a cup of Tetley's? The tone of these albums is wildly different: the Chemicals with their floor-stomping rafter-shaking beats, and Goldie with his complex rhythms and symphonic satellite sounds. Biscuits are basic: it has to be the block-rocking Brothers.
Winner: Exit Planet Dust

On one hand we have the "brothers gonna work it out" refrain alongside contributions from Beth Orton and the fringe guy from the Charlatans. On the other hand, we have the epic Inner City Life: feel your spine shiver with that opening "tiiimeleeeeess" from Urban Cookie Collective's Diane Charlemagne. Since these albums came out, we have endured terrorism, recessions, riots and fascism. Which tune echoes through the ages? Tiiimeleeeeess...
Winner: Timeless

I'm going to ignore the fact that Goldie was obviously named after a famous Blue Peter dog. Timeless's first disc ends with the track Jah The Seventh Seal, which means this album must contain six other seals. The Chemicals have the track Three Little Birdies Down Beats. So what's better: three little birdies or seven blubbery seals? The birdies have it.
Winner: Exit Planet Dust

Goldie's album starts with Saint Angel and ends with Jah, while his track This Is A Bad sounds like a precis of Jesus banging on about good trees bearing bad fruit. It certainly sounds heavenly with all its extended chords, while Exit Planet Dust has chemicals and swearing and a song to evil singing birdwomen the Sirens. No offence, Chemical Brothers, but you are definitely going to hell.
Winner: Timeless

A couple of moments on the Chemicals album proved successful. On Life Is Sweet, I managed to sing "I'm boiling my eggs soft, but I forgot to set the timer" and on Alive Alone I could fit the lyrics "I'm an egg, aren't I, I'm an egg, oh no". It's all pretty negative about eggs though. On the Goldie album, I not only could warble a chandelier-smashing "tiiimeeeer", I could also sing "Om-el-ette, oh those yolken eggs is what I wanna eat, sprinkle cheeeese, I need to be, I need to be your oooeuuuuuf". Speggtacular.
Winner: Timeless

The Brothers chose a photograph of a 1970s hippy couple possibly walking home from a music festival. The soft-hued picture has been flipped, so a clearly American car is driving on the wrong side of the road. It's an Instagram photo 15 years before Instagram. The Goldie design is impressive, with the Metalheadz logo embedded into some kind of robotic cloaca, but it lacks the resonance of its rival.
Winner: Exit Planet Dust

This final section contains criteria guided by Wikipedia's random article button. The album most likely to defeat the eye of Sauron? The aggressive rolling beats of Goldie. The album best made into a cheesy motivational kitchen sign? The Chemicals and the text would be In Dust We Trust. The album best used as a life raft? The Chemicals because it would placate the Sirens. The album filled with the most gas? Obviously Goldie: the album is mostly air. Album most likely to be found in the National Helicopter Museum? With his graffiti lifestyle and gold teeth, Goldie would definitely own at least six of their helicopters.
Winner: Timeless

Two more 1995 albums will go head-to-head in the next couple of days or so. Stay tuned to this blog. See all the riders and runners here.