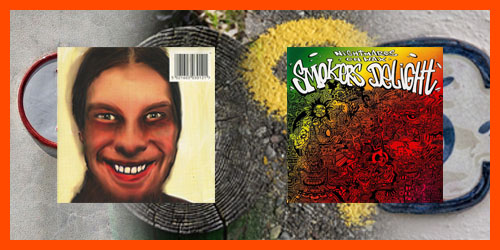 Welcome back to the battle to become the best electronic music album of 1995 in which I play judge, jury, executioner and toilet attendant. This is the sixth of eight first-round contests (I won't spoilt the results, so see the series so far here). The winner goes through to the quarter finals. See the 16 albums I started off with here.

The randomly chosen tie for today is:


...I Care Because You Do by Aphex Twin
Smokers Delight by Nightmares On Wax

We have the 13th best IDM album of all time (say Pitchfork) versus the 15th best trip-hop albums of all time (say Fact). Let's talc this pair up and throw them into the ring. Kamaete mattanashi! Let this bout begin.

Great question. If Smokers Delight was a biscuit, it would be something you'd get from Waitrose: it would be caramel flavoured or perhaps infused with fennel. I can't be more specific because the place scares me. I fled from a Waitrose once after seeing eighteen flavours of breadstick. The Aphex album feels more biscuity, even though it will never move beyond the levels of a custard cream or a jammy dodger.
Winner: ...I Care Because You

The Nightmares On Wax has an earworm so large, it looks like a giant dong: the descending strings of Nights Introlude have swirled around my head for 25 years, partly thanks to their reprisal on Les Nuits. That said, Aphex's follow-up to his Selected Ambient Works albums is a triumph of melody: the gentle steeliness of Alberto Balsalm, the waning flows of The Waxen Pith, the shimmery sadness of Start As You Mean To Go On, the off-kilter insistence of Wet Tip Hen Ax. Neither album especially bangs, but Mr Twin has the most choons.
Winner: ...I Care Because You

This is another straight win for Aphex Twin. Imagine a messed-up Wombles in which the common is made of drugs and instead of picking up litter, they pick up unicorns. And all the Wombles are mauve and made of anti-matter. Yes? Let's introduce the characters. Here comes Ventolin on his skateboard made of rainbows. Running behind him is little Mookid, the Womble with the fifteen udders. Cow Gud Is A Twin is his twin. And there, shuffling behind them while brandishing his walking stick, is old Alberto Balsalm. Wombles of Wimbledon, techno are we.
Winner: ...I Care Because You

While Aphex Twin has spent much of his career looking a bit like Jesus, there is something undoubtedly spiritual about Nightmares On Wax. When you speak to NoW's George, you get the feeling he's trying to connect to a higher power – hence later album titles Mind Elevation and Shape The Future. He'd make a great cult leader. Maybe George is the Holy Spirit, while Aphex is Jesus. And Jesus definitely listens to the Holy Spirit. Does that make me God? Lawks. I hate wearing white.
Winner: Smokers Delight

A write-off. I tried some egg songs, but none of the lyrics could fit. There's a background vocal in Nightmares' Stars which could pass for "eggs" but I think they're saying "hedge". And hedges are not eggs: I know because I've tasted them. If my heart was an egg, Aphex and Wax have broken it, and they didn't even made a heart omelette or a heart cake out of it. Very dis-egg-pointing.
Winner: No-one

Smokers Delight's cover is a jumble of strange totems topped with graffiti-style text to symbolise the dualities of spirituality and urbanity contained within the album's music. Meanwhile, the cover of ...I Care Because You is Aphex Twin's big face. That's right. He drew his own face. Have you ever tried to draw your face? Half the time, I don't know where my face is. I've tried opening my eyes really big but it's still difficult to see my face. Sometimes I pass a mirror, and the mirror reminds me where my face is, but then I turn round to take a good look at my face and it's gone. How can you draw that? It's impossible, but Aphex Twin managed it.
Winner: ...I Care Because You

As if this project wasn't silly enough already, this final set of criteria is guided by the random article function on Wikipedia. Let's jumble up some pages and pick a winner. Which of the two albums is the most science fiction? Nightmares totally has his mind on otherworldly things. Which album would most protect you in a hailstorm? Aphex because he cares (because you do). Which album would be listened to by 19th century cartographer Émile-Fortuné-Stanislas-Joseph Petitot? Nightmares because his track titles reference Venice, Groove Street and a beach. Which album would get baptised with a two-edged sword? The dualities of Nightmares On Wax. Which album is a sanatorium? Aphex because Ventolin will make you better.
Winner: Smokers Delight

Overall winner and going through to the quarter-finals: A relatively easy victory. Aphex, Aphex, Aphex. Twin, Twin, Twin. You can chant that if you want.

Stay tuned - two more albums will battle for the title of best electronic music album of 1995 as decided by me. See all the riders and runners here.

Email ThisBlogThis!Share to TwitterShare to FacebookShare to Pinterest
Read more on: aphex twin, best albums of 1995, nightmares on wax