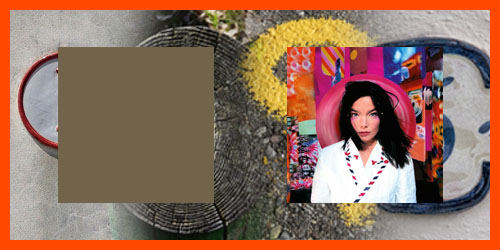 When I started this contest to find the best album of 1995 (see the series so far here), I planned to have a new contest daily. But I haven't had the time, so here we are dragging it kicking and screaming through March as if we've got nothing better to do. See the 16 albums I started off with here.

As ever, I use a random number generator to pick each head-to-head. Remember, only one can survive through to the quarter-finals. This time, we have:

Oh this is going to be horrible. Hey children! Which puppy do we throw into the mincer?

This is the album that signalled Autechre's descent into more complicated, awkward, spiky electronic music, so if it was a biscuit it would be the oaty kind that leaves bits in your teeth. With its filmic anthems and bold ballads, Bjork's second album is more showy: perhaps it would be a jaffa cake or one of those flavoured Penguins, but not something we'd traditionally think of as a biscuit.
Winner: Tri Repetae

I want to take Autechre's Clipper and tattoo the sound all over my naked body. I want to knit Clipper's rhythms into a scarf and strangle myself senseless with it. I want to shove Clipper up my bum and bounce on a space hopper until my intestines ping out of my eyes. That said, nothing says "banging tune" more than Army Of Me, Hyperballad, and, well, half the tracks on Post.
Winner: Post

I'm not sure the imaginary animals on Autechre's album are that cute. Clipper sounds like an angry dolphin, Stud is an amorous stallion trying to hump everything but the fence post, and Leterel is a sneaky eel that's just signed you up to a timeshare con without you noticing. Bjork's Isobel tells the story of a girl born in a forest, but to the uninitiated, the title sounds like something you'd call a warthog if you were trying to convince people it was cute. In a way, it's the antithesis of cute. Strangely, Autechre wins.
Winner: Tri Repetae

I have consulted the runes and they tell me both Bjork and Autechre have Godlike status. Both come from faraway lands (Iceland and Manchester), attracting fanatical followers as they spread their gospel of musical purity. But since Tri Repartae sounds like a sinister Catholic order that flays choirboys for fun, this one has so go to Autechre.
Winner: Tri Repetae

As I sat on the bus improvising egg songs over these albums, one artist clearly won through. With Bjork, I managed to loudly sing "it's oh so quail… you fall in l'oeuf…" and "my name's scrambled egg, married to my shell" and "if you complain once more, you'll meet an army of quiche". I tried so hard to match egg words to Autechre, and as my fellow passengers wrestled me to the floor, I had to admit defeat. There's nothing eggy about Autechre.

Two drastically different covers. The Designer's Republic deliberately stripped the graphics for Tri Repetae's muddy monotone. The Post cover puts Bjork front and centre, contrasted against her hyper-coloured surroundings. Both covers are great. However, on the Post album, Bjork is dressed as an envelope. Never noticed that before? Have a look. Post. Envelope. Post. Envelope. Absolute genius.

Overall winner and going through to the quarter-finals: This was a tough match, but it's Bjork that moves into the quarter-finals. I'll expect angry letters from Autechre fans. To be honest, though, would the Autechre chaps dress up as envelopes? I wouldn't have thought so.

When I get time, two further albums will face off against each other in an attempt to become the best electronic music album of 1995 as decided by me. See all the riders and runners here.

Email ThisBlogThis!Share to TwitterShare to FacebookShare to Pinterest
Read more on: autechre, best albums of 1995, bjork