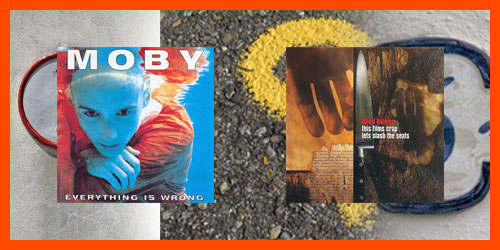 What's black and white and red all over? I have no idea, so why not ignore that sentence and instead read this continuing contest to find the best electronic music album of 1995. With today's post, we reach the halfway point of the opening knock-out rounds, with each winner going through to the quarter-finals. See the series so far here, and see the 16 albums I started off with here.

I use a random number generator to pick each pairing. Today it is:

Here we have very different producers whose music has worked brilliantly in film and television: Moby in Heat, The Sopranos and Stranger Things, and David Holmes in a tonne of on-screen stuff including Ocean's Eleven and Killing Eve. But which one will stand up to my strict criteria? Let's find out.

The filmic flavour of Holmes' work is brilliantly suited to the rich history of biscuits and its many flavours: ginger, plain, chocolate, a bit more plain. As it tumbles from dirty beats into evocative samples, his debut album bridges the gap between his DJing career and his movie scores. And what is a biscuit other than a bridge between cake and bread? In contrast, Moby is the name of a fish and no biscuits taste of fish.
Winner: This Film's Crap Let's Slash The Seats

Holmes has a great ear for melody, and the album neatly loops back to the same hazy chords. But Moby's album has screaming rave tracks and angry thrash metal, with brilliant turns by Rozz Morehead for the fast stuff and Mimi Goese for the slow stuff. Bangin'? It's bulldozing down the doors while shooting foghorns out of a cannon.
Winner: Everything Is Wrong

With track titles like When It's Cold I'd Like To Die, Moby's album isn't focused on cute animals. Many critters enjoy the cold, such as baby seals, baby penguins and all those baby spiders secretly hiding in your fridge. Holmes's track titles evoke a grizzly bear tearing through an orphanage, particularly with Got F***ed Up Along The Way and Slash The Seats. All in all, a disappointment for both albums. Moby scrapes a win because of the track name First Cool Hive: bumble bees are fuzzy.
Winner: Everything Is Wrong

The melancholic claustrophobia underpinning This Film's Crap feels more like purgatory than a heavenly place, despite the clanging church bell that ushers in the album. It's this uneasiness that made it such a remarkable work. On the other hand, Moby gives us rousing anthem after rousing anthem ("take me away!") that could easily be hollered from a pulpit. Everything Is Wrong is the sound of a coked-up church revival meeting. No wonder his early albums included the credit "Thanks to Jesus Christ".
Winner: Everything Is Wrong

The best I could do with Holmes was "she don't even yolk" which isn't even a verb. Meanwhile, after the chorus in Feeling So Real, Moby has a sample that sounds like a truncated "eee-ee-eeggs". In other songs, I found myself singing "every time you touch me, I feel like I'm being boiled" and "I am white albumen, poaching forever, I fry into the blue" and on Bring Back My Happiness "these hard eggs let you go". So much fun. Another win for Moby.
Winner: Everything Is Wrong

An album called Everything Is Wrong and there's Moby looking depressed on the cover with a sad blue face? It's a bit on the nose. A metaphorical nose, that is, not Moby's nose. Stop thinking about Moby's nose. The montage that comprises the cover to David Holmes's album isn't particularly memorable: what do a few rips, a couple of hands and a big knife represent? Gordon Ramsay making whoopie? Yeesh. Don't think about that: think about Moby's nose instead. Holmes wins it because at least it looks like the cinematic layerings of his music.
Winner: This Film's Crap Let's Slash The Seats

This final selection of judging criteria comes to you courtesy of Wikipedia's random page function. Which album is most like a Bulgarian footballer? Holmes because he looks like he can dribble along a touch-line. Which album would make a great motto on a commemorative coin? In Brexit Britain, that would definitely be Everything Is Wrong. Which album should have represented Ireland in the 2019 Eurovision Song Contest? David Holmes is from Belfast, so he's the closest. Which album's hindwings are whitish with an orange subbasal fascia? Moby has the most orange and white on his album cover so, er, that. Which album is scaaaaandalous (said in a RuPaul voice)? The seat-slashing David Holmes, obviously.
Winner: This Film's Crap Let's Slash The Seats

Overall winner and going through to the quarter-finals: This felt like a pretty easy win for Moby. Although he'll be mostly remembered for 1999's Play, selling 12 million units to Wrong's 250,000, it's nice to honour 90s raver Moby with this little success. Everything Is Wrong goes through to the quarter finals.

Stay tuned for another head-to-head battle to find the best electronic music album of 1995 as decided by a jury of one: me. See all the riders and runners here.