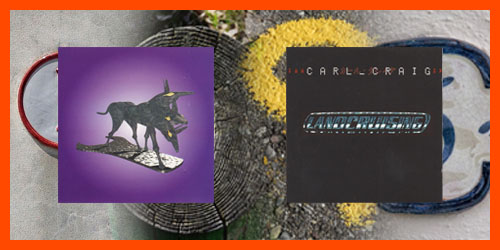 Three weeks ago, I began a battle to determine the best electronic music album of 1995. That battle is still going: this is heat seven of eight, after which we get to the quarter finals. See the series so far here, and see the 16 albums I started off with here. "But Fats, this is going to take many more weeks if you keep posting this slowly." Considering the current climate, that is no bad thing

I fired up my trusty random number generator to pick today's pairing. Remember, only one of these will survive through to the quarter-finals. The choice is between:


Spanners by The Black Dog
Landcruising by Carl Craig

This is a fascinating match. In one corner, we have a seminal British IDM act clearly influenced by Detroit techno. And in the other corner is a bonafide Detroit techno album debut. Good job there is no chance of messing up this contest with comparisons that blabber on about biscuits and cute animals, huh.

The Carl Craig album would be a cookie rather than a biscuit. This is because Americans have funny words for things. They also call herbs 'erbs, pavements sidepavements and aluminium aluminiminimum. Spanners by The Black Dog is such a wonky take on recognisable techno, it would be an unusual biscuit like Mr Kipling Viennese Whirls or those pink wafery things. That said, Carl Craig wins because The Black Dog's techno biscuits would be so loaded with e-numbers, they'd make your eyes pop out of your bum-hole.
Winner: Landcruising

I once praised The Black Dog's Barbola Work because it was "one of the few classic 90s techno tracks that makes you cha-cha-cha". It's easy forget now how alien and amazing their work was when it first appeared. Carl Craig's got the tunes, though: Einbahn is Autobahn on rollerskates, and the sheer 80s drama of Mind Of A Machine is enough to crack a smile on a bloodhound.
Winner: Landcruising

Carl Craig's debut album falls down badly here. There are no animal references in his track titles. I'm not saying he hates animals so much that he sneaks around back alleys baseball-batting weasels to death: that is for you to decide. Looking at The Black Dog's titles, Pot Noddle is definitely the name of a crime-fighting pig and Nommo is its sworn warthog enemy determined on wreaking destruction all across the pig sty. Oh and they're both dressed in tutus, so they're still cute.
Winner: Spanners

When the UK lockdown is over, pop into your local church. Who's the vicar? Oh look, it's Carl Craig. And the church organist? Carl Craig again. Who's that little old lady running the coffee bar? It's Carl Craig in a dress. Now pop to your nearest Buddhist centre. Look at all those little fat statues of Carl Craig! Saint Craig is so spiritually connected on Landcruising, he simply has to be Jesus's favourite. The Black Dog feels more like a crusty old geezer collecting sign-ups for a humanist society round the back of Aldi car park.
Winner: Landcruising

It's not often I type this sentence, but neither album really screams eggs. The Black Dog album suggests Starburst sweets, odd-shaped leeks and an interesting purple mould that's taken hold at the back of the fridge. The Carl Craig album suggests oysters served on a lattice of spun caramel drizzled in the finest liqueur. What wins this category for The Black Dog is the chattery voice in transitional track Bolt1 which definitely sounds like someone yabbering on about Tesco's running out of eggs.
Winner: Spanners

Landcruising is brilliant driving music, and its cover logo is clearly a nod to Detroit's automobile industry. The three-headed CGI beast on the cover of Spanners is more confusing. Is it a dog gone wrong? Is it a fancy paperweight? Is it a hallucination and I really should stay off the Windolene? Of the two, the strange black dog is the more memorable.
Winner: Spanners

There is one heat left in this first round, so stay tuned: the battle to find the best electronic music album of 1995 will continue. See all the original riders and runners here.

Email ThisBlogThis!Share to TwitterShare to FacebookShare to Pinterest
Read more on: best albums of 1995, carl craig, the black dog