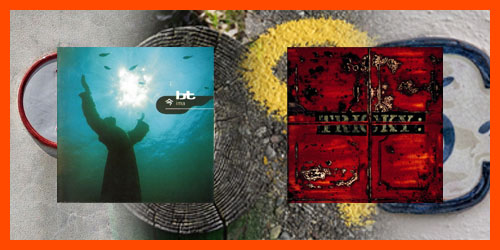 Oh heck. Stop the presses and hold the anchovies. It's the third instalment of my knock-out competition to decide the best electronic music album of 1995. See the series so far here, and see the 16 albums I started off with here.

I use a random number generator to pick each pairing. Today it is:


Ima by BT
Maxinquaye by Tricky

A curious pairing. Two more debut albums, and it looks like a pushover for Massive Attack's mate. But is it though? Read on.

Brian 'BT' Transeau's album is so shiny and smooth, if it was a biscuit it would be coated in chocolate or gold or creosote. Possibly edible, possibly not. The stories of Maxinquaye's chaotic recording sessions bring to mind meandering studio sessions, tapes full of unusable samples and floors littered with vinyl records. If that album doesn't resemble a box of broken biscuits, I don't know what does.
Winner: Maxinquaye

Tricky's album was full of quotable quotes, albeit murmured and deeply smoked. However, BT's album was a landmark in progressive trance that melded the signature chunky house of Paul Oakenfold's Perfecto Records with diva-style singing. The 1996 edition's got Tori Amos on, for warbling's sake. You can't get more iconic than Broadway vocal coach Vincent Covello's turn on Loving You More, one of my most played 12-inches from back in the day. An easy success for BT.
Winner: Ima

Almost none of the track titles remind me of cute critters, so I can only assume BT and Tricky both hate animals. The BT album is full of aspirational titles like Embracing The Future and Deeper Sunshine. You try telling that to a rabbit: they just want to sniff lettuce and look at hay. Tricky's album doesn't fare much better: gothic titles like Suffocated Love and Black Steel poll quite badly with the baby otter community. Tricky saves the day with one solitary track title: Pumpkin is definitely in the top 100 hamster names. A winner by a (cute, snufflin') nose.
Winner: Maxinquaye

Possibly the most memorable track on Tricky's album is Hell Is Round the Corner, which sounds like Jesus ranting to the Pharisees. But the BT album goes one better by portraying on its cover the underwater statue Christ Of The Abyss. Hey Jesus, which album do you prefer? "The one with my picture on, obviously, you idiot." Good point. Thanks, Jesus. "Bog off." Oh. Okay then.
Winner: Ima

A hard (boiled) win for BT here. Across various songs, I could fit the lyrics "Egg? Hell yeah" and "I'm loving eggs more than I ever have before" and "these are my ee-eegs". Maxinquaye confused my tastebuds and I ended up composing a three-hour mumblecore opera about Pot Noodles. I don't wish to libel the Trickster, but I don't think he has ever seen an egg in his entire life.
Winner: Ima

The composition of the Ima cover is pleasing, with Wet Jesus embracing the sunlight in the centre of the design. But if you buy a different edition, the soggy saviour is sidelined in favour of a stock image of some clouds underneath a grey rectangle. Disappointing. The rusted and peeling panels of the Maxinquaye design is a stronger design, suggesting both decay and warmth, and if you staple-gun it to your Ikea wardrobe, people will think you own vintage furniture.
Winner: Maxinquaye

Finally, here is some assorted criteria generated with the help of Wikipedia's random article function. Which album has the highest fat content? Tricky doesn't sound healthy on Maxinquaye, so it has to be that one. Which album would most startle a moth? Ima because of the blinding light on its cover. Which album would win the US Open Cup Final. I don't even know what this is and I can't be bothered reading the Wikipedia article. Let's say Tricky, because he can team up with Massive Attack and win the football / golf / netball / yachting / whatever it is. Which album is conceptual art? Obviously Tricky because of the graffiti connection. Which album sounds most like I Pray On Christmas, Harry Connick Jr's 1993 Christmas carol? The one with Jesus on the cover, of course. Isn't that right, Jesus? "Get lost." Oh.
Winner: Maxinquaye

In the next day or three, two further albums will battle it out to win the accolade of best electronic music album of 1995. See all the riders and runners here.

Email ThisBlogThis!Share to TwitterShare to FacebookShare to Pinterest
Read more on: best albums of 1995, bt, tricky