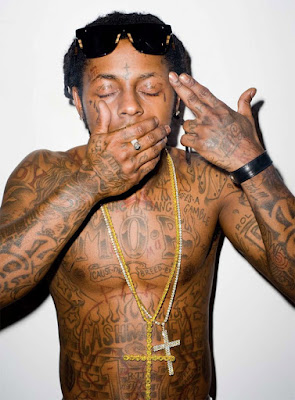 Lil Wayne (pictured), for those who don't know, is a gun-toting cough syrup-slurping MTV Man Of The Year rap artist who, in his own words, is "lick, like a lollipop".

Bizarre similes aside, Lil Wayne once recorded I Feel Like Dying. This is a Mary Jane toking piece of rap whimsy where Lil (can I call you Lilly?) muses on playing basketball with the moon, and when it's played backwards it seems to throw up the line "without the trousers, we are nude".

Flying Lotus has done his own version of I Feel Like Dying, which is even more blunted than the original. You can hear it on his MySpace page. It's not the first time he's covered Lil Wayne, and I'm all in favour of electronica artists doing other people's tracks.

I'd especially like Venetian Snares to cover the Benny Hill theme tune. Are you reading, Mr Snares? Will you do it? Just for me?

Back to the MySpace tracks. There's another good Flying Lotus track on there too: Prince is a very short tune that sounds like Mr Ozio dropping like it's hot on a Nintendo. Like a sexy Pacman popping blue pills instead of yellow ones.

Put that in your simile pipe and toke it, Lil Wayne.