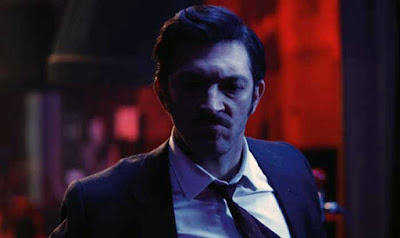 It's provisional because I will see more films before this year gasps its last breath. I'm thinking of two in particular. That rumbling sound you hear is a Coen Brothers flick stampeding towards us at a rate of knots, and Where The Wild Things Are could just be a furry delight.

What do you think?

Sorry, I missed the dong in Watchmen. Maybe because I watched it on the plane, and only got the censored version.

Yeah I suppose. Like Eric Morcambe maybe once said, they are the right films, but not necessarily in the right order.

EG, id put UP a lot further Up, if you'll excuse the not really a pun. It gave me a lump in my throat and no other film this year has done that.

And Milk should be higher, methinks.

What no Star Trek? That would sneak on to my list, maybe 17 or 18 or somewhere.

I'm sure there's another one as well but I can't for the life of me think what.

Anyway, nice list and I would say a decent enough year for films no? wonder what oscar season will throw up.

Dave - I think you're right, actually. I might change it when I repost a final list later this year. Star Trek was meh - I'm just not a sci fi guy (well... apart from the three sci-fi films in my top ten).

I think I've missed off Burn After Reading. Maybe.