The Electronic Music Symposium knows its onions (and/or turnips) 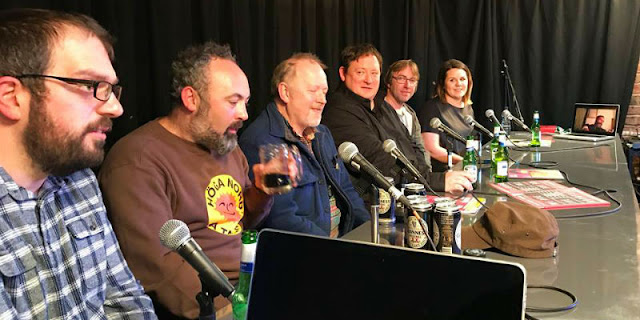 You know that allotment sitcom where Richard Briers and Felicity Kendal live next to Margot and Prime Minister Jim Hacker and all they talk about is carrots and looms?

I felt a bit like that at the Electronic Music Symposium panel discussion at Factory the other day. There was me with my home-woven dungarees and turnips made from old wood. And sat next to me were far superior neighbours next door, including 808 State's Graham Massey and Twisted Nerve's Andy Votel. I'm not sure which one's Jerry and which one's Margot in that analogy.

Also on the panel were Tom Autobot, DJ Euphonique (who took the above photo), Aaron from the Lost Village Festival and, from his pad in Ibiza, DJ Doorly. We talked about the ubiquity of music technology and how good mini-Moogs were. Inevitably for a male-dominated panel, we were challenged about opportunities for women. I brought a bunch of Electronic Sound magazines with me, which were devoured by Manchester MIDI School students.

The Music Symposium Series is run by former Ministry of Sound Operations Director, Tony Rigg, who hosted the discussion brilliantly. It was a sold-out gig and it was great to be in the company of so many fellow bleep-heads. Loads of them were young and bright-eyed and starting their first big music projects. They were so like me at that age: optimism mixed with energetic impatience and a need to make their voice heard. Actually, I've never lost that, and I hope they don't too.

Thanks to the organisers for putting me on an interesting panel, and choosing a great venue. And to Scan Pro Audio for bringing some great kit. (They're good: I described a set of headphones I once owned and, without hesitation, they told me the exact make.)

Great turnips all round, I reckon.