Will you put a cross in Jeremy's, er, circle for #Grime4Corbyn? 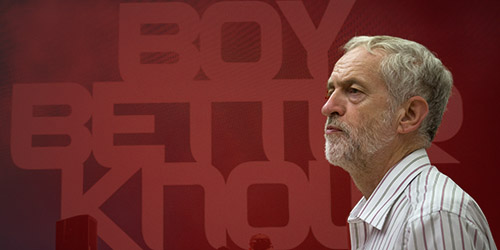 The #Grime4Corbyn campaign is a website offering tickets to a London gig if you register to vote. It's got plenty of glitch going on and even has Corbyn phat beats auto-streaming like it's back in the old days of web 1.0.

Of course what will actually happen is that the Tories will win a landslide and, with mandibles waving all over the place, eat all the country's orphans. Corbyn will quit politics and next be seen appearing as Tom in Channel 5's remake of the 1970s sitcom The Good Life.

But still, it's a nicely done initiative, so more please, Mr and Mrs Internets.

As I write this, an election van is loud-hailing it past my window. It sounds like Charlie Brown's teacher. Or it might just be the scrap metal man. I'm not going to vote for a piece of metal: I'm not stupid.

To misquote Wiley, Jeremy Corbyn is a ninja turtle, you can't step into his circle, and in a soundclash, he will hurt you. So, y'know, whatever colour of turtle you prefer, put an X in the box on polling day.