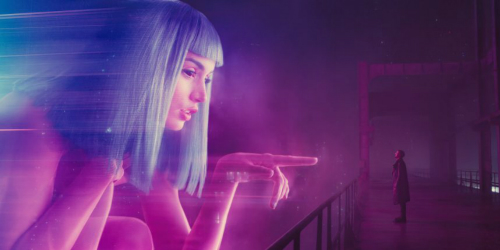 Considering they decided to go easy on the set-build CGI, Blade Runner 2049 looks pretty smart. But what about the soundtrack?

Icelandic composer Jóhann Jóhannsson is the guy who has the trouser-soiling task of living up to Vangelis's epic score for the original film. Rather him than me. Have a listen to it in the trailer below.

I never like people who worry sacred cows, and indeed there's a skeleton yard of failed sequels throughout movie history. This project has sacred cow molestation written all over it. Yeesh. I just got shivers from Matrix Revomited, or whatever it was called.

But a good soundtrack can make a serious difference, and if we end up with a shaky film but an amazing soundtrack - like Tron Legacy - I'd be happy enough

Another potential downside? I'm an Older Harrison Ford sceptic. I even cheered a little when that thing happened in a certain big film not so long ago.

Overall, I think this particular origami cow should lead a happy and untroubled life. Jóhannsson worked with director Denis Villeneuve on Sicario and Arrival. That's some CV.

See what I did there? I referenced origami. I'm dead clever, me.

Stop reading this and instead read Electronic Sound's interview with Jóhann Jóhannsson where he maps out some of his musical influences.