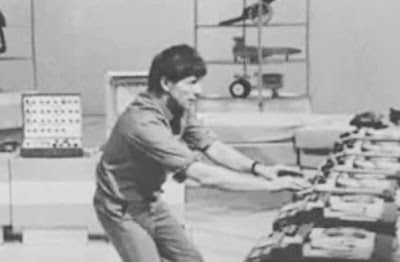 Here's John Noakes wrestling with a load of reel-to-reel tape recorders and a VCS 3, a synthy bit of kit beloved of prog rock bands.

What was the legendary Blue Peter presenter doing? Was he pumping out sick techno? Was he having it large with block rocking beats?

Was he, as I strongly suspect, putting a donk on it?

I think we should be told. I would google it, but I'm busy making a pair of y-fronts from sixteen Fairy liquid bottles, a tub of battery acid and two hundred yards of sticky backed plastic.