Best electronic albums of 2020: an introduction 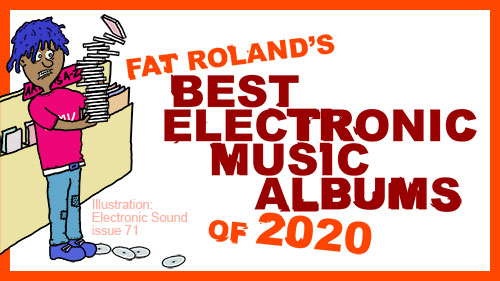 Welcome to my annual album countdown in which I reveal the best electronic music albums of the year.

If you're following this live, then this introductory blog post is an amuse-bouche, with the full tapas of end-of-year posts – almost three dozen in all – arriving in the next day or two. When they arrive, they will hit you thick and fast: imagine being in a food fight but your opponent has all the food. I'm going to blog you in the mouth until you vomit.

That paragraph made me quite hungry until it got disgusting.

In 2020, lockdown days spooled before us like a broken cassette player farting out its tape, or like Paul McCartney unfurling his lizard tongue. It gave me plenty of time to listen to music, which is why this year's countdown will expand to a top 25.

As in previous years, I'll write summaries of the many albums that didn't make my final list. I've called them "also-rans" in previous years, but this year I shall be nicer and call them "special mentions". Like that time I failed my cycling proficiency test, but got a "special mention" for not breaking any gnomes as I did the wheelie into the pond.

Here's my usual disclaimer. Read this with a pinch of salt. The order of my top 25 would be different if I was blogging this a week earlier or a week later. I have written about my favourite album of the year for another website, but already that album has moved down the order. I am fickle, and by "fickle" I mean "unreliable" and by "unreliable" I mean "not worth reading, I'm off to browse Pitchfork instead".

Despite my disclaimer, you should take the special mentions seriously. I will only include an album if it has properly interested me in 2020. It's not like a parent introducing all of their children with a forced grin when they'd rather hide their youngest in a scullery until the lesions have healed. No. Respect the albums. They have earned their place in this blogging series, and the gap from number one to the briefest of special mentions is smaller than you think.

That's it. What else can I tell you? This end-of-year blog series is not available in Welsh. I haven't written a single word yet, so if I am kidnapped by pirates then the blog series will be replaced by repeats of Will & Grace. Never poop on a hedgehog because they are unhygienic as it is. It is possible for Jesus to love you but also to think you are a bit of a dick. That British plane couldn't have exploded in Die Hard 2 because it barely had any fuel onboard.

Right. Off you pop. You've still got some turkey left. Go and make some sandwiches while I get on with writing. The blog posts will run hourly from noon until evening, starting either tomorrow or the day after, depending on how much writing time I get. I'll aim to announce the Album of the Year on the afternoon of the 31st, before you're too deep into your novelty absinth.

Edit: the blog series has launched. I'm publishing hourly blog posts from 10am until 6pm, starting on December 28th and ending with the Album of the Year at 4pm on December 31st. Follow it here, or scroll this Twitter thread.

Browse the rest of the Best Electronic Albums of 2020