THIS is the day that music died (repeat to fade) 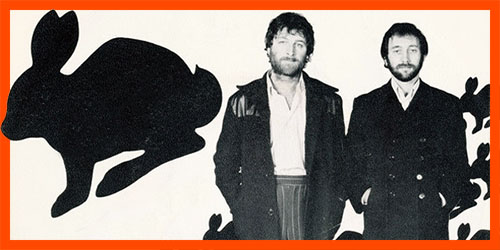 The day that music died is 3rd February 1959, when Buddy Holly's plane crashed in bad weather, the phrase later being immortalised in Don McLean's American Pie.

That is guff, of course. The day that music actually died was an entirely different day. If you don't believe, look at my totally true and reliable Twitter feed.

Here are some days that music died, as tweeted by me.

CHAS AND DAVE HAVE SPLIT. *This* is the day that music died. http://bit.ly/173hCs

The day that Chas and Dave split. Dave had found gigging too much, with Chas, who died in 2018, explaining that Dave "has horses and he loves driving them round his grounds and painting gypsy wagons, which he's very good at, so I don't think he'll miss the gigging."

*This* is the day that music died. And cigars. And jewellery. And tracksuits. And tinted glasses. And armchairs with holes in the arms.

The day that Jimmy Savile died. Oh dear. In my defence, the allegations against horrendous man didn't appear for a while after his death. Everyone knew he was dodgy, but none of us took him seriously because he seemed truly ridiculous. Crumbs.

*This* is the day that music died. Not all the other ones. This one. https://t.co/Q7yhMWri11

On Halloween 2015, frizzy saxophonist Kenny G announced his intention to play the longest sax note ever while on a flight. He'd previously played an E-flat for 45 minutes and 47 seconds, which is a lot of E-flat. Although his record was since broken, there's no evidence of Mr G succeeding in his in-flight blow job, and apparently Guinness World Records aren't bothered about it anymore.

Failed reality TV singer Steve Brookstein appears to have deleted his Twitter account. THIS is the day that music died.

The day that the terrible Steve Brookstein deleted his terrible Twitter feed. I think his account was restored: I don't know and I can't be bothered to check. A jazz Twitter account took my tweet at face value and invited me to a Brookstein gig in Cobham. I didn't go.

Ah hold on, THIS is the day that music died. pic.twitter.com/EYfD0tBVtg

The day that a Bargain Hunt auction was artificially inflated by Bez's girlfriend sneaking in bids as a ringer. "“My girlfriend thought she was helping out," said Bez, whose plan forced the programme to be reshot. As I've told many a fellow clubber at three in the morning, if you can't trust the Happy Mondays, who can you trust?

No, wait, ignore the others, THIS is the day that music died. https://t.co/Jlygp7fVC1

The day Ed Sheeran was announced as artist of the decade by the Official Charts Company. This was based on record sales, which seems a narrow way of judging these things. How much banging techno did he make? How many Fat Roland dance moves did he adopt? How much effusive praise has he left in the comments section of this blog? I shall be writing to the Official Charts Company to complain.

THIS is the day that music died. https://t.co/jwygpZMgOL

3% for Nathan Fake?! THIS is the day that music died. https://t.co/CkefaK2hzD

My choice of Nathan Fake's Blizzards losing out in Picky B*stard's Albums Of The Year tournament. At the time of writing, its vote share has doubled, but it doesn't look hopeful. This is despite me praising its "rhythms rising from the foundations of the clubs we no longer go to" (read my article here). I think we can all agree that me not doing well in a competition is definitely the day that music died, making it comparable to the loss of legendary musicians in a devastating plane crash. Jeez. That's the worst thing I've written since Savile.

D'you know, I'm beginning to think that music's still alive. Check its pulse. If the blood's flowing at the same tempo as Chas and Dave's Rabbit, there's hope for us all.

Further Fats: The day Engeljames Blunterdinck representing us in the European debt crisis (2012)

Further Fats: The day Maroon 5 finally got a UK number one single after eight years of trying (2015)