Blog Of The Year 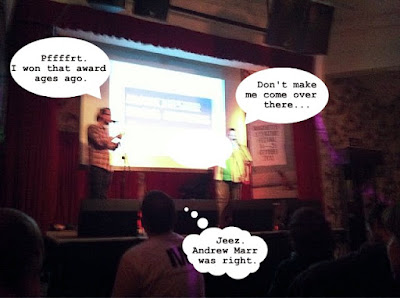 I have been peppering the web with snotty flakes of false modesty in preparation for my campaign for blogputsch ending in failure. But believe me when I said I didn't expect to win anything; I meant it.


Banana skins
The awards event was held in the Deaf Institute and was graciously compered by Manchester Literature Festival's Jon Atkin. He introduced several short story readings by 330 Words contributors, all of which were brilliant and some of which included the phrase 'banana skins' in their text (by coincidence, but it proves I was right about 330 Words in my recent blog post).

My Shitty Twenties, the reigning Best Writing On A Blog winner, raised warm smiles with her blog post about gerbils and About A Boy and the spelling of Gandhi, while previous winner Chris Killen peformed a remarkable Choose Your Own Adventure story in which I volunteered to be the protagonist.

You can see us in Tom Mason's picture above, Chris reading the story and me making the crucial decisions. Except I've added a few speech balloons. That's me on the right, there. Chris Killen had me going on a date with crap hair then trying to escape through a toilet window. Or was it me that chose that? It was very chortlesome because he's a great writer.

And then came the awards. Best City And Neighbourhood Blog went to Love Levenshulme, more of which later. Best Arts and Culture Blog went to Ribbons and Leaves, which combines old and new by scanning typewritten blog posts (I must dig out my old typewriter some time).

The Best New Blog winner was the collaborative story-writing project 330 Words, while Best Personal Blog was awarded Might As Well, otherwise known as one of the brains behind Beards Of Manchester.

Each and every one of these blogs bagged a well-deserved win, and I urge you to frequent them constantly.

As for my wins, it played out in slow motion. As a couple of my competitors in the Best Writing On A Blog category won in other categories first, my chance of winning presumably increased. The preamble to my category mentioned the winner having a "slightly obscure subject matter", and that, along with a knowing tap from Do A Barrel Roll's foot, had me furiously trying to write an acceptance speech inside my head in the five seconds remaining before my name was read out.

On the stage, I took a slow sip of beer (got that tip off an actor a while ago!), hesitated because I nearly fainted from shock, and then apologised for everything I've said about James Blunt over the years.

To go on to win a second award, and this time the biggie (Blog of the Year) was surprising and humbling and delightful and scary and all the other things that bubble up from your stomach when everything happens at once. It gave me an excuse to be the first person ever to namecheck Venetian Snares at an awards ceremony.

Fat Roland the website has been chugging away for eight years, eight months and eighteen days, and as it became more bloggy (proper URL, some semblance of design) and more 'writerly' (six a.m. writing sessions, lots of editing), it still squatted in some obscure corner of the internet pooing out its electronic effluent on a modest gaggle of off-beat but lovely fans.

The extra sweetness from the yummy winnery was the fact I won Blog of the Year jointly with Love Levenshulme, another blog that is focussed on something small. but that something small is treated with passion and commitment and, it has to be said, sacrifice (turns out, one of them gave up their TV to concentrate more on writing, as did I earlier this year).

I'm pretty sure ninety-twelvety per cent of Best Writing winners have gone on to be multi-millionaire novelists, so I'd better start writing my tome on Murcof b-sides straight away. I'll just copy out Dan Brown's books, twaddle a few words around and colour the edges of the book pages red because publishers think it's trendy.

Meanwhile, will this blog change? Will it fudge. There are bleeps to be fondled, squelchy basslines to be goosed, and I'll be flappered sideways if I'm going to give up this corner of the internet in my battle against r 'n' b clones, despotic pop loons and Michael chuffing Bublé.

Thank you for reading. NOT YOU, BUBLÉ.

Well done Fat Roland! Keep up the blogging - it's great :)

Thanks, both. I have fashioned a massive medal out of a car wheel and tin foil, and I shall be wearing this for the rest of the year.

Making up the numbers... pft.

A well deserved congratulations Mr Roland, and long may your success in awards continue. What is next in your sights? Start planning now for the Food and Drink Awards next year? You can then drop Autechre into your acceptance speech, some kind of witty retort involving a moussaka or something like that.

I'm planning on a spectacular win in the Darwin awards. I'm not entirely sure this would be good for my long-term career prospects but they do get a lot of press coverage...

That would definitely be a case of make or break I suppose.
Or break and break.