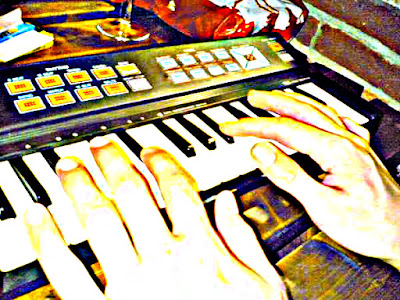 Norfolk is a place that is only famous for producing slightly more than its fair share of formula one drivers. It also produced Luke Abbott (pictured), who recently popped us a debut album called Holkham Drones.

I've sort of ignored Abbott since 2006, when I praised his "manic atonal silliness", but this debut for the Border Community label has regained my fuzzy attention span like a happy slap, a Tango kiss and brain haemorrhage all rolled into one.

The album takes krautrock as its base (compare Abbott's Brazil with Neu's Hallogallo) and then weaves its repetitive curcuit-pumping machinery into a technoid tapestry of emotive, heartfelt electronica. Trans Forest Alignment is detuned pop melancholia, title track Holkham Drones is the very definition of sad disco, and the static beatbox of Hello Tazelaar dances a beautiful dance with melted synths that positively drip from the speakers. Stick that confused metaphor into your badger and smoke it.

It may be too reminiscent of Boards Of Canada in places (2nd 5th Heavy), and it may try too hard to be Clark (Baalnk), but this disc hooks the heart and the head more than most dance albums released in 2010.

Oh and in case you were wondering: Martin Brundle, Ralph Firman and that's about it. I did say "slightly".