Blog off 1: the Manchester Blogmeet came and went

The umpteenth Manchester Blogmeet was, I think those attending would agree, rather lovely.

It was held in Umbro's design studio, which is nestled on the edge of Newton Street and Dale Street in Manchester's Northern Quarter. The place feels like some kind of penthouse suite owned by a 14-year-old: it's brilliant.

A massive thanks must go to Umbro for sponsoring the whole shennanigans. This kind of event may look like lots of people getting tipsy and arguing about 1990s pop music, but, like an ageing Spice Girl, they tend to develop wide ripples over time. Relationships in Manchester's creative community are hugely important, and the Blogmeet helps no end.

Thanks also to those who attended. Blog types represented at the meet included 330 Words, Ancoats Tweeps, Bart, Come See The Duck, Do A Barrell Roll, I-COM, Inside The M60, Manchester Is Not New York, Me, me, me..., Nine Tenths Full Of Penguins, Power Is A State Of Mind, Roy Keane's Lucky Scarf, Scatter Cushions, SEO Manchester, Technical Faults, Tim Dobson's Blog, Voices From The Below, VUI Design, Speech Apps And All That, Who the fudge is Benjamin Judge? and Write In For Writing's Sake.

I won a game of chess that night. Some say it was a slight fluke, but you haven't seen me take down Kasparov. The conker is a queen or a king or a knave or something: 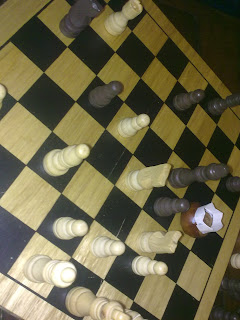 This may look like the empties bucket, but actually I wore this tub on a piece of string round neck most of the night as it was the closest thing I could get to a lager intravenous: 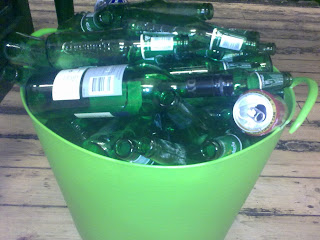 There was art flipping everywhere. Except the half-naked guy. It's a mirror and that's me taking a photo with the camera at my hip: 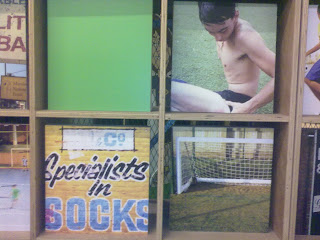 I told him he wasn't invited, but ole cardboard face always has to come down. Actualy, the cartoons around the place were part of an exhibition featuring the work of Todd James: 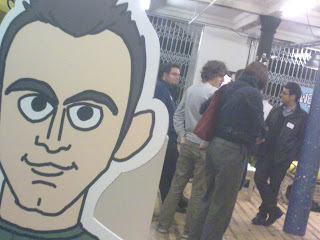 I had to get the logo in somehow, but this may be overdoing it: 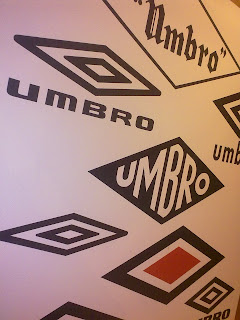 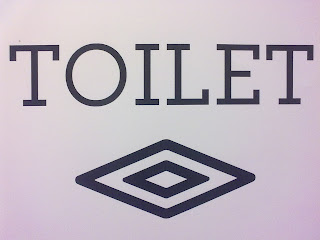 Here are some of the attendees. These guys didn't chat much. They just stood there drinking, while Do A Barrel Roll (centre) struck some poses: 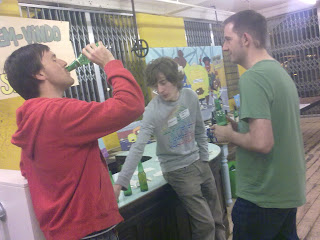 You'll notice the name badges in this next picture. I helped organise this blogmeet on the condition, set by usual organiser Kate Feld, that name badges were used. Sounds cheesy, but it helps the whole thing run smoothly and enables conversations like this to happen.. .repeatedly:

Random person strains to see my badge: "Oh. So you're Fat Roland." 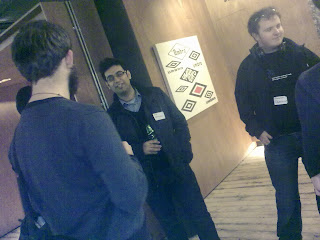 A modern design space, but note the old-fashioned clock. Apparently it gives the right time twice a day: 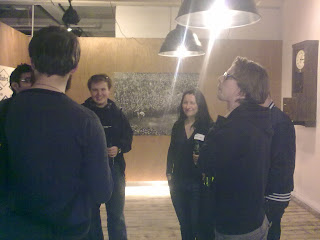 If you misbehave at the blogmeet, everything will be noted down by Power Is A State Of Mind. I'm hoping we'll all end up as characters in a novel some day (or maybe just in his blogmeet write-up). If you have also scribbled something about the blogmeet, shove a comment into the end of this blog post. 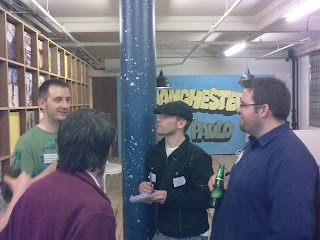 Jump to the second half of this blog post about blogging here.

i is the best at pose striking.

Power is a State of Mind's note taking was almost unnerving, especially considering his blog name...

Your pose-striking was the greatest since Madonna's Vogue era. Co-incidentally, Power Is A State(a.k.a. Matt)'s notes consisted only of Madonna lyrics cribbed and memorised from her Immaculate Collection album.

Thank you once again for the linkage to my blog and of course for the writeup itself and the spicey piccies :)

You still remembered more than I did even with all my manic scribbles! Cheers for the link!

I hope you got some good tips n that. I was going to point out my Sitemeter logo, but it seems to have disappeared from my site.

Nice one..I need some advice for Seo Manchester service.
any one help me?