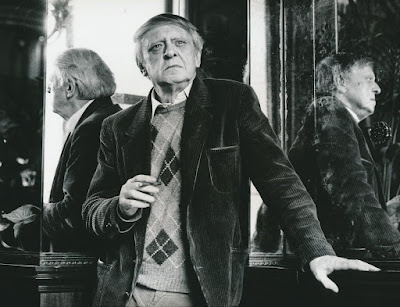 Today is the 100th anniversary of the birth of Anthony Burgess, the leading Manchester author and one of the biggest writery people of the 20th century.

Tonight, I'm compering an anniversary event A Life In Letters at the International Anthony Burgess Foundation. It's a pretty flipping amazing honour, and I've got actual proper actors - Arthur Bostrom and Verity Henry - to be the voices of the letters.

Delving through his letters - kept in a secure archive in Manchester - has been pretty revealing. The life of a writer laid bare: the aspirations, the arguments, the mentoring and the sheer mechanics of it all. All the while being more erudite than I could ever hope to be.

As for me? My writing life at the moment consists solely of these moments:

I don't think Burgess mentions nipping off to the newsagents once in his letters. I've a lot to learn.