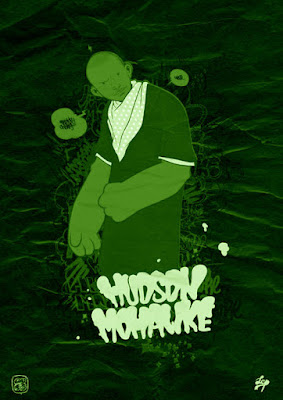 I'd better get my 2009 preview finished before this whole New Year lark becomes unfashionable.
March.

The Future Sound Of London, whose artwork make gatefold vinyl a pleasure to ogle at, will play their first live date for over a decade at the Bloc weekender. It is unlikely to be as frenetic as Dan Deacon's live performanced.  Deacon counts a mallet among his percussion instruments, and has been taking to the stage with a synth-heavy 14-piece ensemble at recent gigs.  For that reason alone, seek out his new long-player Bromst.

Oh and former members of Plone and Broadcast have formed Seeland, who I reckon are a hot tip for 2009. When you clap ears on their debut album, you'll spot whispers of Stereolab and the BBC Radiophonic Workshop.

One of Paul Simon's favourite bands, Grizzly Bear should give Warp Records a new album in May, or thereabouts.  Speaking of Mr Simon, I still haven't forgiven the garfunkled-one for Graceland.  And while we're at it, I'm still boycotting Sly Stallone films for the travesty that is his 1996 movie Daylight.

In August, Orbital will morph together for their first live performance since John Peel's Maida Vale sessions, this time at the Big Chill. As I said in this post back in November, they have promised it won't be "an exercise in nostalgia". Of course, we all know it will.

Portishead ended 2009 without a record contract, so expect some In Rainbows-style tomfoolery with their fourth album. It should be out around September.

On a more commercial tip, ex-Pop Idol contestant (spit!) and new darling of the press Little Boots will claim 2009 as her own. She's worth watching because she uses a Tenori-on, which is a pretty Japanese music making box that lights up. The same people who rave about 'Boots enthuse about La Roux.

Finally, you may need to strap me down because I am insanely excited about one particular artist.  The Glaswegian Hudson Mohawke refers to everything as "shite" on his Myspace page.  He's not being negative: he's just being, well, Scottish.

Mohawke is a new signing to Warp Records, and he flips between electronica, hip hop, electro and soul in ways that really shouldn't be possible.

Someone somewhere labelled his music as "emotronic" (probably H-Mo himself).  He's working on an album which should sound a little like this:

Perhaps this year will be the year I finally get into Electronica...

Grizzly Bear have guitars. As does Squarepusher. There's hope for you yet.*

Nice one. I saw Hud Mo at a show in LA and he rocked the house. He looked pretty young! I wouldn't say any older than like 24, tops.

Your site has an extensive collection of good artists. Keep up the good work!

Thanks, JP. If you look hard enough on that list on the right, there are plenty of bloody awful artists too!