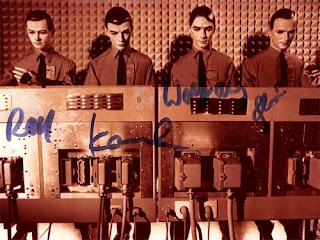 Before I shine the neon lights of my wisdom onto the whole Kraftwerk situation, let me first say thanks to all the new people that have shown a little computer love by reading my blog over the new year.
I enjoyed writing my 2009 preview posts, and it seems you enjoyed reading them. My blog is now read by more people than it ever has been, so you are part of an ever-pulsating crowd clammering for a bit of Fat Roland. Well, you can have me. Every last bit of me. (I am now sprawling on my chaise longue, swooning like a fop.)

Right then.  On to Kraftwerk.

Florian Schneider, the robotnik on the right in the piccie above, has exited the Kraftwerk autobahn by quitting the band.

According to my pocket calculator, he was in the band for 38 years.  To put that into perspective, teenager-snuggling metallics-botherer Bill Wyman was in the Rolling Stones for only 30 years.

Schneider co-founded the band that invented every other synth band ever.  He used to ram a flute through a ring modulator.  Sir David 'Christ The Saviour' Bowie named a song after him.  That was a metaphoric ram, by the way; Florian Schneider does not, and has never abused woodwind instruments.

But still, he has quit.  Sigh.  I hope his musique doesn't stop, and although he'll never be big on the radio, activity for this model music maker should hopefully continue.  I also expect his solo projects will be far less desperate than my attempts to shoe-horn in as many references to Kraftwerk track titles as I can into this post (eight altogether - um, can you spot them?!).

Florian is a delight to watch on this interview from a decade ago.  He starts off reticent and bemused, and it just gets worse...

That's because she asks him questions and then talks in another language. I'm sure she says 'croissant' at one point.

*possibly not a fact

Are you still eating biscuits with your feet, or is that now soooo last year?

The reason that Autobahn was so successful was not its innovative use of technology.

No, it was the unwitting German-English crossover