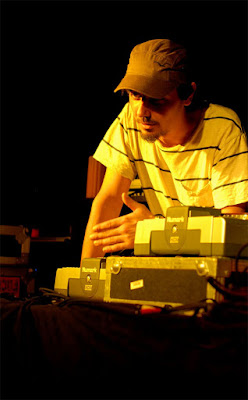 If I stuck two fingers in your face, you'd quite rightly twaz me round the chops with your broomstick.

But if I stuck Two Fingers in your face-- note the capitalization-- you'd quite rightly hold me and squeeze me and call me George.*

The first digital single of that partnership hit like a freight train this week.  What You Know has been hailed as Blade Runner played out in Tottenham.  If the streets of London are strewn with paper unicorns after this post publishes, you know why.  The single fuses hip hop and drum 'n' bass, as a twitchy nod to the early DJ Food era of Ninja Tune Records.  Mercury nominee MC Sway grimes things up good and proper with an angry rant on racial stereotypes, and it's entertaining to see Tobin make room for the vocals by stepping back from the wall-of-sound big fistedness he's known for.

The Two Fingers chaps will drop an album, which I believe will be titled eponymously, closer to Easter.

Also out this week is Syntheme's daringly titled 12" Syntheme Vol 2.  The key word here is "squelch".  She gets a Roland TB-303 Bass Line synthesiser and pummels it until it's squelchy.  She recreates a banging acid rave in a basement by pressing a big red button labelled 'squelch'.  She squelches like no other: a fine 12" from Planet Mu Recordings.

Hudson Mohawke's new EP Polyfolk Dance is out today(ish).  He's been banging out tracks for ten years, and since he's only 22, that makes me sick.  In fact, I'm already fed up with him, so I'm not going to tell you about him justifying all the hype, about how your ears will find him outrageously addictive, and about how he's working on The Best Album Of 2009 Maybe (which will be fawned over extensively on this site - stay tuned).

*one of my favourite Looney Tunes quotes, from 1961's Abominable Snow Rabbit.

How good were the tracks he did when he was 12?

He probably used Microsoft Songsmith (see YouTube for plenty of awful examples of that).