The Designers Republic vs B12 Records: are the 1990s dead? 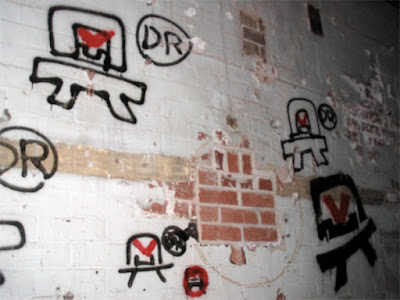 I was sad to see The Designers Republic close its doors last week.

Through work for many bands (Autechre, Aphex Twin, Pop Will Eat Itself, Pulp) and classic video games, they pretty much defined 1990s graphic design for me.

According to a piece in the Creative Review, founder Ian Anderson explained:


“We’d lost a couple of clients, didn’t win a couple of pitches, got a tax bill which should have been sorted out and wasn’t and a major client who didn’t pay the money they owed us – in themselves any of those things would have been fine but when they come all at once there’s not much you can do.”

So sad.  They made a Google image search look sexy.  Their record covers looked like the music, like a kind of creeping Talented Mr Ripley metamorphis.  Wipeout 2097 wouldn't have been the game it was without their abject coolness, and they utterly defined PopWill Eat Itself's image.

They're not wiped out for good (did you see what I did there?) as I'm sure something will rise from the paint fumes.  Speaking of paint fumes, the picture of Designers-style graffiti at the top of this post was taken by John Wardell.  No-one needs Banksy when you have this graf in the basement.

On a more positive vibe, B12 are keeping the 1990s well and truly alive by rereleasing their complete back catalogue in a seven volume Archives series.

Rewind to the early '90s for a moment.  Modern electronica came out of the dregs of rave culture, when a cluster of assorted dredded dancers and smiley pill-poppers wanted music for the head as much as for the body.

B12's Archives series tracks the invention of IDM and intelligent techno, and spans many important moments in post-rave electronica.  It includes tracks used in the Electro Soma and the Artificial Intelligence compilations, the former of which you can hear at the bottom of this post.

Absolute techno nirvana, in seven double-CD chunks.  Volume three is out this week, which largely contains tracks from '91 and '92 and contains four unreleased tracks.  The 1990s may be dead visually, but the beautiful noise lives on.

Email ThisBlogThis!Share to TwitterShare to FacebookShare to Pinterest
Read more on: aphex twin, autechre, b12, pop will eat itself, pulp

It's a damn shame about DR. What bad luck.

One of my favourite things in the world is my Blechsdottir DR keyring. Is this now a collector's item? Ebay?

I suspect DR will be back. The Creative Review piece suggests they thought they were losing their way a bit, so maybe they need to go away then burst back on the scene again. Like Guns N Roses. Erm...

Hi, nice you reported on this! Also sad to see them go. I am thinging about rebuilding my site http://aciddome.com completely in the style of the Electro Soma style as a kind of tribute to that era. I love the Archive series BTW.

It's such a good look, that whole tDR thing. Edwin - as long as you don't get rid of your font. I like your font. I know it's a really basic font, but it makes it look like you're typewriting your site, which I like.