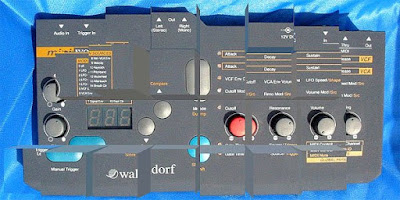 Stefan Betke's started his career as the influential techno experimentalist Pole when he dropped a piece of music equipment (pictured, suitably rearranged) and the resulting crackles it produced became alluring to him.

As Pole releases his new 12" Alles Gute/Alles Klar, two dubby tracks of scratchy Underworld in slow motion, I decided to have a go at becoming an influential techno experimentalist. I decided to create music through destruction.

I began my smashing in my television with the fridge (and not a cat as I nearly did on Mercury prize night). I wanted to throw the fridge at the TV, but it proved too bulky to carry - and suprisingly hot - so instead I hurled the telly at the fridge. Screen first.

The telly no longer made any noise, but now my fridge is emitting a threatening hum. I like it.

This failed to produce any interesting noise.

I then re-tuned my DAB digital radio to Radio 2. This produced a frightening noise, which is too horrific-- no-- too chilling to describe here.

So I shall stick with Pole. The A-side Alles Gute is the better track. It's a gloopy groove where the spaces are filled with buzzes and sub-bass. Alles Klar, the one featured on his Round Black Ghosts dubstep compilation, is slower and moodier, cutting its own rhythm in a choking post-rock apocalypse.

Yeah, Pole - nice! I think Pansonic made a career out of broken equipment as well. I found the simple act of turning the TV to a white noise channel and turning the volume up and down in a rhythmic fashion works well, as does the radio.

Yep, haha! I've got a very old cassette somewhere where I was shifting back and forth from a death metal radio program to a evangelical speech - the stations were right next to each other. I thought i was being pretty clever at the time. Love to find that tape again, just for a good laugh. In the meantime, a little off topic, but here's a link to an excellent free compilation I found off LastFM. All great artists, kind of in the BOC vein - that hip hop IDM. Enjoy!