Squarepusher's psychedelic number - could it send him (robert) miles off course? 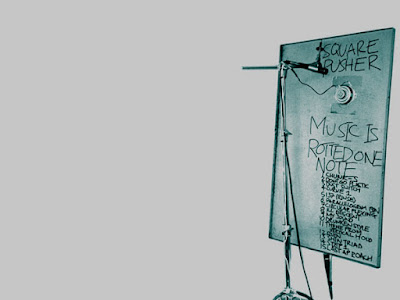 Edit: This post was taken down by Blogger for copyright infringement. I have re-posted it with the offending material removed. (It was a free mp3 - and a fairly average one to be honest.) If you had commented on the post, your comments are tragically lost in the ether forever.

On the way to a festival down south, Somerset maybe, some time in the mid 1990s. We hurtle down the motorway, passing the mammoth spliff around the car. Giggles. Banter. Sinking into our seats at 70 miles an hour.

And then, the question: "Are we nearly there yet?" More giggles. Someone splurts and rails against his seatbelt. Shaking with laughter.

The driver turns his head, heaving a full 180 degrees away from the windscreen. Plumes of smoke erupt from his mouth and he grins. Teeth from ear to ear.

The driver is stoned. We're 200 miles off course. We're heading for Scotland.

It took us hours to get back on course that day back in the 1990s. Do you know what I blame for our weed-infused diversion? Psychedelic trance.

We'd been pumping out some crazy psychedelia through the car's tinny speakers for the whole journey and, with help from the drugs, we had been transported to another dimension. Almost literally.

So I'm curious, therefore, to check out Squarepusher's Numbers Lucent EP, which hits shops in a few days.

The Square one (classic album artwork pictured above) is promising a diversion of his own, into "self styled explorations of dance floor psychedelia." His record company's words, not mine.

Psychedelia? This post was going to be a review, but I can't find anywhere to hear the blasted thing. So I googled 'dance floor psychedelia', but all I got were references to trance music. That sounds wrong: Squarepusher is to trance what Kiefer Sutherland is to darts.

So why is Squarepusher promising "psychedelia"? Will it be as unlistenable as this delightfully grumpy blogger promises? ("Bloody annoying noise I say.") Are we going to get classic 'pusher rave? Or is he going to sound like - gulp - Robert Miles, the pop trance artist who's as psychedelic as a bucket of wet hamsters?

The nation waits with bated wotsits.

Heh. It's the only kind of grumpy to be.