Monthly mop-up: cross-shaped houses, cross ambientalists, and not getting your wires crossed in the studio 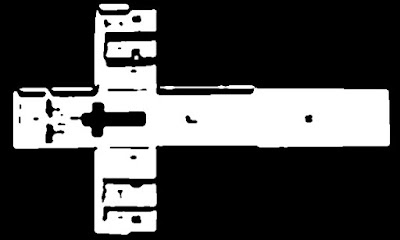 I have scooped up this month's unused snippets of bloggery-pokery and baked them into one tasty pie of goodness, especially for you, my dear reader.  Think of this as my 'deleted scenes' extra for fatroland.com.
Before I get stuck in, absolutely my favouritest release this month was Lukid's Foma - more so than Squarepusher's Numbers Lucent.  A music producing chum described Numbers Lucent as "the sound of the inside of someones ass" if it had a bad Casio stuck inside it.  I think that was a compliment, but most of it sounded like the weaker noodly stuff that didn't qualify for his Just A Souvenir LP.

Consider this quote from retail trend analyser Greg Hodge when he spoke to the BBC a few weeks ago:

"Is there room for a music store on the high street? The answer is probably no."

Things look grim, with the CD album under threat from the unbundling of albums on services like i-Tunes, the collapse of Zavvi because of a Woolworths-related supply disaster, and HMV-owning Waterstone's cutting jobs in their goods-in departments.  Will HMV survive 2009?  Yes.  They have reduced their losses and sales are actually up.  Is there room for a music store on the high street?  Yes, it's just that there will be less actual music in them, and lots more Wii.

Have you advice for recording in studios?

No, but Alan Parsons has.  My favourite bit is "don't suck the life out of a recording by overuse of limiting and compression."  You don't know how many times over-production annoys me, especially, oddly, in the Christian music industry.

It did stop, but the headlines made for uncomfortable reading.  The prince of all that is ambient Brian Eno spent January being quite vocal about Gaza.  Go and read his Stealing Gaza piece at the angry Counter Punch site.  He has expressed his support for Palestine in various newspapers, including the NME.  Between him and Vince Cable, the Lib Dems seem to be kicking ass right now.

Where do Justice live?

In a big cross-shaped house, of course.  Well, not exactly, but some crazy French architects have built a house (abstract pictured above) in tribute to the duo. There's a wonderful quote from Kanye West:

"I want to live there so badly, but people would have to know that the house is a cross shape because of Justice, not because I was some sort of religious fanatic".

This from the guy who brought us Jesus Walks.

I recommended the heavenly Here We Go Magic to the A New Band A Day website.  They liked what they heard and prompty posted it on their blog.  You should spend some time on A New Band A Day: there are many gems to be found.

I have to say, as much as i want to directly support musicians and buy their cds, it's been a while since I've bout one brand new. Honestly, I'll buy barely five new ones a year anymore, which is, sadly, mare than what most people buy. I was in a Barnes and Noble bookstore yesterday, browsing through their cds, and many of them were $18.00! Who in their right mind would pay that? No wonder sales are abysmal. Usually, I hit up the local used shop, or Amazon anymore. I still love the physical aspect of a compact disc - the whole package - the art (much good electronic music features great art and graphics), liner notes, etc. Still, I can't see how bands and music makers could get by on selling cds alone anymore.

They don't get by on CD sales, that's the thing. Hence all the talk of '360 degree record deals' which take touring profits much more into account.

I seriously think the album as a format is under threat due to the unbundling of product on things like i-Tunes, but that' the subject of another post!...

It wasn't like this when we all had gramophones, y'know.