All that Ritornell jazz trumped by a wonky Shitkatapult 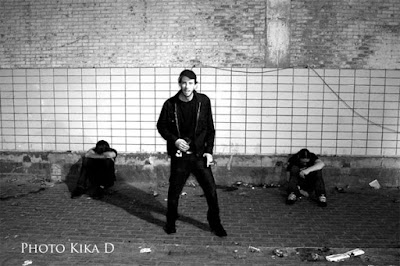 This week's award for the jazziest electronica to come out of Austria goes to Ritornell, whose debut album Golden Solitude is out in a few days.

The duo comprise a jazz pianist called Richard and a sound experimentalist named Roman, the latter most famously having drummed with Patrick Wolf. It's a CV that doesn't pump my purist electronica heart.

The album is sparkle full of mellow washes, sparse drumming, and sound structures that refuse to be rushed. I'm less enamoured with the ladles of jazz saxophone that dominate the album toward the beginning, and more impressed with the found-sound metallic echoes of later tracks like Disappearing City.

Ritornell sounds like the kind of music Nightmares On Wax ought to be making, and I guess I'm too much Roman and not enough Richard to thoroughly enjoy the record.

Wonky techno label (and John Peel favourite) Shitkatapult have churned out their 100th release, and it's the best thing since sliced eyeballs.

Strike 100 is a triple-vinyl collection of the best of Shitkatapult, and it's all rather mellow. Which is astonishing, considering the craziness this label has released in the past. A number of artists have written stuff especially for the album, including T Raumschmiere (pictured: photo by Kika Da Silva) in a rumbling minor key mode, and The Orb on remarkable form with some serious big fat chords.

The stand-out for obvious reasons is Apparat's shimmering remix of Johnny Cash's I Heard The Lonesome Whistle Blow. Not the best track, but most def the coolest.

Listen to bits of the whole dang album on the Shitkatapult website - you'll notice one of the tracks is by Felix. I'm pretty sure it's not this Felix.