Oh Venetian Snares, hold me in a tender embrace, and whisper to me these magic words: "Splooj Guzzlers" 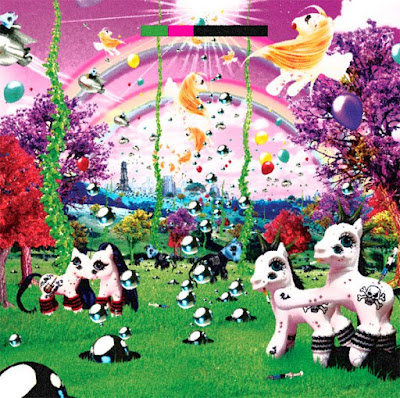 I'm knackered and broken like an old shoe without laces nor soles nor... well, basically I'm like two strips of leather that just drop off your foot because there's nothing to hold them together.

So anyways, that's my excuse for not writing anything this morning*, and instead I'm posting a couple of videos courtesy of a damn fine YouTube channel called Expert Knob Twiddler.

It's a paradox that the exciting new kid on the scene, Spotify, has bugger all decent electronica, whereas Old Man YouTube, which was full of Rihanna and Janet Jackson and Leona Lewis crap until they killed a lot of it off, is bursting with futuristic bleepy beat combos.

Here are the videos.  The first has audio snippets from Venetian Snares' new album Filth (my favourite track name: Splooj Guzzlers), due out in a couple of weeks on Planet Mu.  One of the cuts is about Mr Snares' cat.  And below that are excerpts from a Venetian Snares 12" called Horsey Noises, a quite different animal from the album, and due to hit the streets in June. (Adapted cover of a 2007 single pictured above.)

If you followed me on Twitter, you'd already know about these videos, of course. Oh and while I'm plugging, my little exhibition thing at the Green Room is only on until this Saturday, after which I start a month-long radio project. Meanwhile my other little exhibition thing that I helped curate at Nexus continues for a couple of weeks.

*Oops. I seem to have written a full post after all.