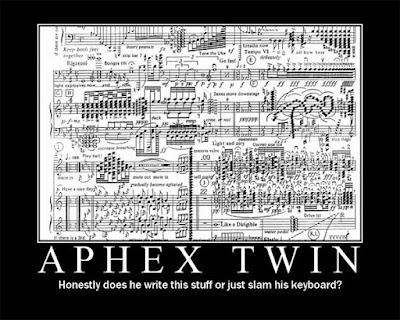 Lies plume from my rotting mouth like farts from a knackered horse.

I thrilled at the sound of my own knowledge when I claimed Aphex Twin's new album didn't exist in this piece last month.

The rumours of an album called Konklaver were "absolute guffballs," I said. "There is no Konklaver," I said.

If I was on fire, I wouldn't piss myself out. How wrong could I be? Aphex Twin is in the process of writing a new album, and it could hit the shelves this year.

"We’re definitely going to be putting out a new album by him. Hopefully it will be this year, if I can prise it out of his hands. It’s definitely on its way.”

Don't expect any leaks, though. Beckett has no idea what the Twin has up his techno sleeve, so us mortals in the blogocube won't be getting any sneaky advances.


“I don’t know a single note or anything about it. It will be as much of a surprise to me as anyone else. Basically, I find out what it sounds like when we go into the mastering room and he puts it - well how it used to be, he'll put the DAT player in and there it’ll be - so that’s the first time I’ll hear it.

“Then I’ll go onto my knees and thank him and then we’ll put it out.”

It may not be Konklaver, which was mooted for a March release in various fake forum postings around the interwebble. So I was right about that. But it is a new album.

He's not exactly, um, prolific, is he?

That music sheet above is not Aphex Twin's...