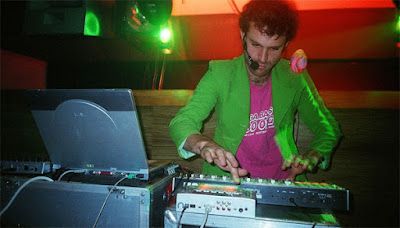 Will you please, please just shut up?

Some people need to learn less is more. One of those people is Tim Exile (photo: Stephen Pariah), whose new album Listening Tree is out in a week or two.

Exile, when he was just known as Exile, had a fearful reputation as a god of techno. Debut album Pro Agonist raged with killer snares and beat-pummelling Squarepusher-ness.

Fast forward to 2009, and Tim Exile's Listening Tree is crammed with bizarre rants about spiders webs (When Every Day's A Number) and one-way streets (Bad Dust). The "dreams of a lifetime wrapped in plastic" line on Carouselle is pure Mighty Boosh.

Squish the fussy vocals underfoot, and Listening Tree is beautiful, intricate, thrilling and theatrical. I just wish he would tone it down. The analogue ferocity is here, but it's on a leash and it's wearing those annoying white glasses worn by people like Sam Sparro.

Another album now. And just to show I'm over my grouchiness I displayed on Sunday, let me be sparkly and fairy-like for a moment.

The album is as middle-of-the-road as you'd expect from the Bergen boys, and it is all yay-and-light where Exile is boo-and-dark. But the production is as pristine as Exile's in its own way: it sweeps you up on a giddy, unscary rollercoaster especially designed for princesses.

For example, the sawing synth line on third track Vision One is the most delightful thing I've heard for ages. I could just do without the Air-style cutesy vocals.  Which, of course, brings me back to the theme of this post...