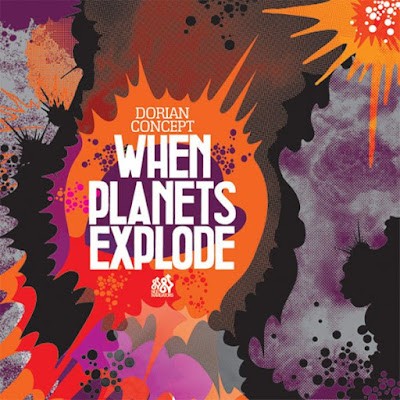 Dorian Concept's album When Planets Explode is a sumo wrestler with smiley faces tattoed on his ample buttocks. He's here for serious business, but he's not afraid to be playful either.

Oliver Johnson is an Austrian producer with a microKORG under one arm and John Coltrane records under the other. As Dorian Concept, he slapped us across the chops with a couple of neat singles recently, including the head-noddery The Fucking Formula as chronicled on these pages here.

Concept's absorption with detail steals your breath. This is only his debut album, but he sounds like a master. Not hanging around on any one loop for too long, he dives straight into the morphing experimentalism that made Autechre's name.

Johnson must spend decades in the studio. Every week. Literally.

The formula doesn't always work. Mesh Beam Splitter has more noodling than an eating contest in a Wagamama, and after a while it's tiresome and your beard smells of peanut sauce.  Meanwhile, Her Marshmallow Secret sounds like Prefuse 73 waiting for a bus.

However, when the playfulness kicks in, it's a different record.  Clap Beep Boom nicks its cue from The Fucking Formula, where the beats are so crisp, they should have a Walkers logo. Color Sexist's bassline has more fuzz than Fozzie the bear watching Hot Fuzz whilst listening to Fuzzbox on a de-tuned radio.

The playfulness makes up for the seriousness. Whether you like it jazzy like 4hero or super-sawing like Dabrye - or you just have some bass bins that need testing - When Planets Explode is worth wrestling with.