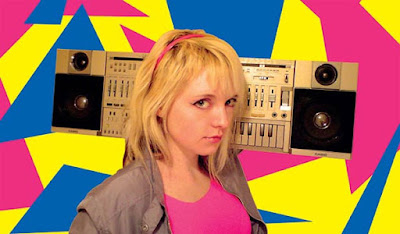 I'm not sure if Lasers N Shit is the best name ever, or a lukewarm sigh of a title. Either way, it's the debut LP from Syntheme (pictured).

The acid overlord, who has been squelching her trousers off on a series of 12"s, doesn't pull any rabbits from any hats. Instead she sticks to familiar ground: 4/4 drum sequences, a Roland 303 going ninety-to-the-dozen and, er, apart from a couple of downbeat diversions, that's it.

But that's the trick with Syntheme. It sounds simple, like the spirit of Phuture channelled through Squarepusher's cheerier side. Don't be fooled. It's well-programmed, gurning, glitterball techno that's as much for the bonce as for the tootsies. It's magic.

It's both uncompromising and accessible, from the opening fanfare of Klimek's swooning True Enemies And False Friends, through the insistent underwater iciness of popnoname's Nightliner, to Tim Hecker's shimmering epic Shosts in Silver. Yes, "shosts". This album is recommended for late nights snuggled up to your headphones, your pet goldfish and a bucket of benzodiazepine.

Finally, and I'm really late writing about this, I wanted to mention Circlesquare's Songs About Dancing And Drugs. This collection of melancholic electropop took five years to arrive, and some of it (but not all) is worth a listen - especially single Dancers' hesitant funk and pining guitar.

"I'm not sure why you should listen to it. But I think it would be a good idea if you did." Not my words, but that of Circlesquare on this slightly dull YouTube interview.

Snoring pantheons? Benzodiazepine? Slightly dull? I've ended this piece on a downer. Bring back Syntheme, with her jolly lasers and her, um, winsome shit.

I have it on good authority that syntheme's music is produced by afx, luke vibert and global goon. I'm not sure who to believe though, cos I've seen playing in london!

Anonymous 2 - it just seems a little too obvious to be true, although I swear that's a picture of Lauren Laverne, not Lou Wood.

Wow, you're really branching out to actually listen (and almost even recommend) something like Circlesquare - something not totally stuck in the late 90's - great work!

It's Global Goon, she's hired to play the gigs.

Not entirely unlike Milli Vanilli, then?