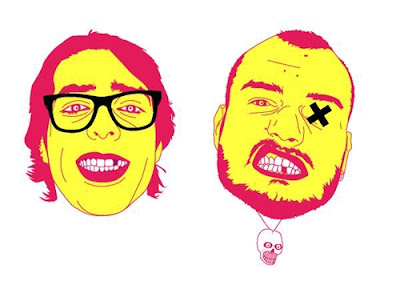 Hello, December, you snowbag of Christmas fun, you.

Here are some things you may have missed recently, mainly because my Twitter account has shrivelled and died and so your premier source of electronica information has stopped. In fact, you've probably been so bereft without me tweeting, you're no doubt huddled in a corner shivering and dribbling.

- Rustie has dropped a bomb in the shape of a Crookers' No Security remix. Legendardy squawkbox Kelis has sassed herself all over this track, and her vocals work well with his computer-game take on the track. Having said that, it's the first thing Rustie has done that has bored me a little. (Crookers pictured above.)

- The Grauniad has been musing on the death of hip hop. Writer Simon Reynolds places it around the time of Nas' Hip Hop Is Dead, or maybe when Timbaland declared his love for tapey-finger stadium whingers Coldplay. He wins points for slagging off auto-tune, but loses points for using the dismal contraction 'slanguage' (surely, 'slang' would do?).He says:


"I still hear quite a lot of bump and skitter in street rap but there's a pedestrian familiarity to the beats: they do the job solidly enough but they're the rhythmic equivalent of comfort food, reflexively tugging at your hips and shoulders but never approaching the stark strangeness of early Noughties productions like Ludacris's What's Your Fantasy or J-Kwon's Tipsy."


I think he's got a point, although there's a danger in judging the healthiness of a scene based on what's in the charts. If you took that as a bellwether, most techno genres have supposedly never existed.

Still, I think there's a wider malaise: we haven't had a true musical revolution since rave. The Beatles made music fab, punk stuck a safety pin in that bubble, while rave danced all over the eighties' grave. What since? Drippy guitar geeks? Videos stuffed with girls in tight lycra? Susan Boyllocks?

- Finally, Eclectic Hermit has come back into the light, smothering us with some Ninja Tune scrumptiousness. Welcome back.

I wonder about your comment regarding the lack of a musical revolution. I think the musical revolution has come in a different form: the dissemination of technology that makes it easier for people to produce at home. There is an exponentially larger number of people producing music than at any time in the past.

The problem, in my mind, is that there is so much music out there that it is difficult for a real movement to begin. Great, revolutionary stuff is happening... especially in genres like Post Rock. But owing to the sheer volume of music that is produced every day, it is no wonder that much, if not most, of it does not get into a majority of reviewers hands...

Actually, you're right. We're bang in the middle of a massive music revolution. It's just not about the content any more: it's the medium, and it all stems from home computers. Damn you, new fangled machines!

Maybe we don't need massive revolutions any more. It's all about a massive, shallow (and entertaining) expanse rather than big peaks of mass interest in one thing.

True. And it is going to get harder and harder to find the next Van Gogh in the vast wilderness of home production.

I saw Max Tundra, who I think is absolutely fabulous, this past August in Chicago. I was surprised by how few people showed up. I think at its peak, there were about 30 people there. Certainly he warrants more of a crowd.

The thing is, the only groups with the power to get the message out to a large audience are the recording companies... who, after all, have money to spend on advertising. Sans the recording companies, it will be very, very hard to bring about another revolution, similar to the Grunge revolution of the 1990s, the rave revolution... etc. After all, as you stated yourself, there is a massive, shallow expanse rather than big peaks of mass interest.

I hear your sentiment, though. And agree. I want to find the next Van Gogh, and I'd like for all of you to appreciate him with me.