These are my final top ten favourite films of 2009. It's a re-edited and expanded version of my provisional list posted in November.

This is part three. Check the rest of my blog for parts one and two.

Other films of note

The best British comedy of 2009 was In The Loop, although I think it suffered against a superior TV series. The best US comedy was The Hangover, but it certainly wasn't enough for a top ten position.

Sean Penn's turn in Milk is worth a mention, as is the uplifting headlocker The Wrestler. 9 was astonishing to look at and is an essential DVD purchase, while The Men Who Stare At Goats may just be Clooney's best performance yet.

As for animation, Watchmen was bold in its scope and is a classic of its kind, while Up certainly gave us the best five minutes of the year when it tracked the courting, the marriage and the loss of a beautiful relationship in a heart-breaking montage.

Oh and Coraline should claim the best 3D visuals of the year, but it seems James Cameron stole that thunder in his otherwise tripe-spewing Avatar.

On with the final two... 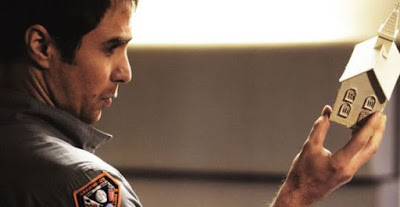 Sam Rockwell has been mining on the moon and is ready for his imminent trip back to earth to see his wife and kids. Surely the last two weeks of the mission will pass without event?

It's difficult to talk about Moon without giving too much away, because it's the bizarre plot that is the crux of the whole film. Is this real? Who is Sam Rockwell? Is Kevin Spacey really trapped inside that computer? In short, there is an accident and then Sam's reality shatters into space debris.

The isolation of the moon jumps from the screen in spine-freezing chills as Rockwell gives a compelling performance as a man who is trapped and scared and just wants to go home. The soundtrack, as you'd expect from David Bowie's son, is tremendous. This film is experimental, complicated and effective.

I wish I could say more. Just see it. Watch the trailer.


1 - Where The Wild Things Are 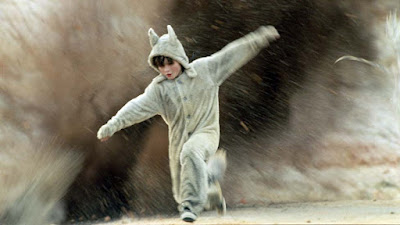 "Will you keep out all the sadness?"
Carol

Max is a naughty boy who ends up in a forest full of monsters. Wild rumpus ensues. Max gets home in time for supper. The end.

This is Spike Jonze's first directorial feature since the mind-fizzling Adaptation seven long years ago, so the numerous cinema punters who walked out half way through probably have no idea that Jonze was never going to deliver (a) a standard blockbuster about monsters nor (b) a standard children's film about monsters.

Because this isn't about monsters. Yes, the furriness of Max's friends helps fuzz things up a lot, but this is fundamentally a film about childhood - and the loss of it.

Empire magazine called this a 'mood piece', and they are right. The plot doesn't matter: the joy and the frustration of childhood is writ large in Where The Wild Things Are. It's so brilliantly realised and uncompromising (you should read Dave Egger's accompanying novel), this makes it the best film of 2009.
Max lives in a world where his actions have no consequences, where his world is the only one that matters. He has no idea what his selfishness is doing to his family, and he is on that cusp of having to put childish things behind him - but he can't let go.

And so, he joins the world of Carol and Judith and KW and all the Sesame Street drop-outs as they smash down their own homes, nearly crush Max to pieces, punch holes through trees and engage in childish squabbles.

There is a sinister edge throughout (the eating threats, the pile of bones, the suffocation scene later on), but it is only enough to keep us a little uneasy without ever resorting to nastiness.

The inevitable goodbye, where the monsters howl in glorious unison as they mourn for Max's friendship and for their own hopeless state, ought to leave you floored and broken - but also a little thankful for the short childhood you had.

This is part three. Check the rest of my blog for parts one and two.