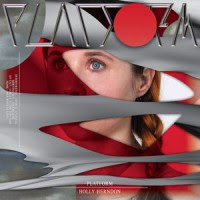 Holly Herndon destroyed music in 2015. She picked it up by earlobes and broke its face off. She then picked the fragments off the muddy floor then polished them up into a towering audio sculpture so astonishing, there is, was and will never be nothing like it again.

This is Platform, a sequence of ten tracks that takes in surveillance, synthesis, pop music and Autechisms (yeah, that’s a word now). It’s so far removed from the hackneyed phrases of popular EDM that this has become an album that – emphasis with a capital N – Needs to exist.

Amid all the ethereal abstraction, you wouldn't expect Chorus to actually have a chorus, you wouldn't expect Locker Leak to end up being her version of Everyone's Free (To Wear Sunscreen), and the opening horror of New Ways To Love suprises when it turns out to be a gateway to what might be a dungeon of choristers.

For something so alien, it doesn’t half stick in your mind after listening. Everything's broken and I think I like it.