When the Dog and Partridge became The Beautiful South... 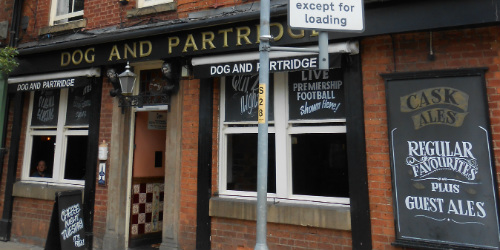 Do you remember The Beautiful South pub?

Here's my recollection. In the mid-90s The Beautiful South released Blue Is The Colour. You know the songs: Don't Marry Her; Rotterdam (Or Anywhere). Kind of twee, a bit of an indie sensibility, great for coffee tables. 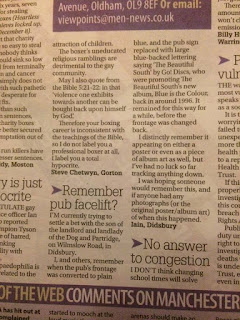 There's one aspect of the album promotion, though, that seems to have disappeared off the page of history. To tie in with the album, the Dog And Partridge pub in Didsbury (pictured) was rebranded.

The D&P was a bit of a legend back then, known for not only being part of the infamous Didsbury Dozen, but also for its sawdust and gigantic doorstop open sandwiches.

The D&P was stripped of its name and turned into a big blue-fronted 'THE BEAUTIFUL SOUTH'. I suspect it was for photo shoots for record company artwork.

I'm having trouble, though, finding any documentary evidence that this happened. And by "finding evidence", I mean, "I googled it for a bit and it didn't come up".

I might have the details wrong. I dunno. Alas John Turrell, the pub columnist I used to work with just round the corner from the D&P, is no longer with us, so I don't even have a handy expert to ask. After a Facebook conversation, my mate Iain contacted the local paper (pictured) - maybe something will come of that.

Do you remember the Beautiful South rebranding of the Dog And Partridge? Were you involved with the project? Are you a dog and/or a partridge? Leave a comment. Or email me. I'd love to know more.

Sorry this wasn't about electronic music. But those doorstop sandwiches were great.