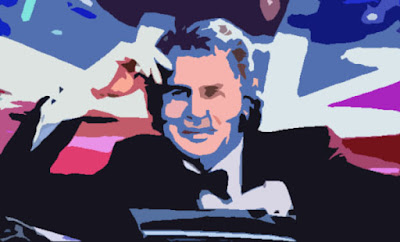 Having Engeljames Blunterdinck represent us in the European debt crisis can only lead to one thing: the actual day that music died.

We all remember the Eurovision classics. Boom Bang-a-Bang by the Justified Ancients of Lulu. Save All Your Kisses For Me by early 90s hop hop group The Brotherhood. And the dance routine from Making Your Mind Up, where Cheryl Baker ripped the skirt off Roy Castle.

But who's Friedrich Engels Hump Backed Whale? He's not even real, like Nicki Minaj, Rizzle Kicks and someone whose name is whatever Scrabble letters remain once you've spelled Nicki Minaj and Rizzle Kicks.

Bert And Ernie Bumper Car, who these days looks like he's wearing a mask of his own face, killed John Lennon or something when he stopped Candy Flip's Strawberry Fields Forever from getting to number one. In the Eurovision, Engelbert (number of Vanilla Ice collaborations: none) will go head-to-head with Ireland's Jedward (number of Vanilla Ice collaborations: one).Why can't we have Jedward instead? They're a shaved Zig and Zag, which means they're brilliant.

Even Sun readers, who have had to learn to read on Sundays, are furious:


"To get anywhere in Eurovision in this day and age is difficult for this country.  Look at Blue??  Popular boys in the UK and Europe, good looking, young and can sing... but didn't win.  Old Humperdinck has no chance... I do wish him well but it will be "nill points" for you lad X"

We should get back to the days where we voted for our Euro entries. Bring back Andy Abraham, Scooch and Gemini, each of whom have won the contest seventeen times (verification needed). Jump-start the virtual corpse of the 200-year-old Cliff Richard (mummification needed).

We haven't got long before Scotland invades the UK. This is our Europe moment: our final countdown.

Email ThisBlogThis!Share to TwitterShare to FacebookShare to Pinterest
Read more on: engelbert humperdinck

I want to see the list of people who told them to fuck off because it was beneath them. Am guessing Cliff, Lulu, Tom Jones, Shirley Bassey, Rolf Harris, Bobby Crush, Bonnie Tyler, the Reynolds Girls and Showaddywaddy.

I think they chose him because the last UK Eurovision act to have as many as six syllables in their name won the competition.

Miss N. Seekers and Mr B. Ofman take offence at that suggestion.