A little Novation motivation for my creation stimulation (ignore the cats) I bought a new thing. It's a MIDI controller. You plug it into your DAW and, wait, hold on, this reminds me of a Twitter conversation I had with Benjamin Judge. 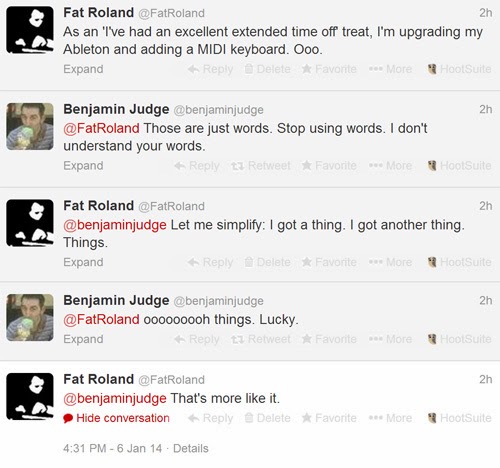 So I got a thing. It's a Novation LaunchKey Mini and it's super cute. You can see it in the photograph above. Ignore the cats. They were a present off chums in Scotland. The cats, that is. Beautiful, aren't they? They're like real cats but not real.

I've not released anything as Hounds of Hulme since 2012 apart from as backing audio on Fractions. It doesn't mean I'm not constantly banging out mad choons of varying low quality; it's kind of a necessary creative splurge that keeps my brain ticking.

Further Fats: Because / a melon / only slightly: birthday thoughts (2012)

Email ThisBlogThis!Share to TwitterShare to FacebookShare to Pinterest
Read more on: hounds of hulme