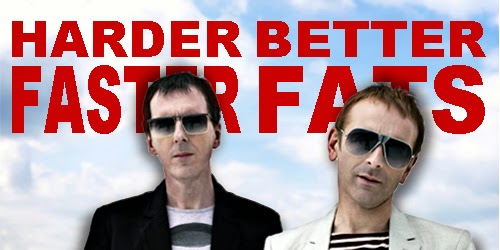 In the spirit of this site being a bit more personal than Fat Roland On Electronica, I wrote a lengthy blog post about how my life is awful and we should all just live in a dungeon gnawing the plaster off the walls and listening to Lionel Blair read out the contents of his own soul.

Instead of bombarding you with the whole thing, and to inject a little entertainment into it, I am going to split it out over a few weeks. I am also going to make you listen to this:

Underworld's Always Loved A Film makes me feel nostalgia mixed with a tickling, bubbling hope that fizzes from foot to groin to noggin. It's in this spirit that I present this week's 'Harder better faster Fats'. Yes, that's what I'm calling it. Shut up.

So then. By way of an introduction: I feel uneasy about 2013.

Despite brilliant high points such as Fat Roland’s Electric Shorts and the Edinburgh Fringe, it’s left me with an uneasy feeling. I joined an amazing writing group, did some really fun video and Twitter work, and some wonderful luck came my way. But I think I let opportunities slip.

These blog posts will be me working out that slip.

I love that those films because I am stupid. It was all so slightly off-the-rails and I love deadpan. But every time I watch it, I feel that I could be watching Airplane!, which is even better.

Maybe that's what 2013 was like: Naked Gun when you could have been enjoying Airplane! If you're not familiar with that analogy, replace those film titles respectively with Bradley Walsh and Bradley Cooper, or the current series of Sherlock with any other series of Sherlock.

I feel optimistic about 2014. I've made myself some promises. Little targets throughout the year to make the next 12 months more, well, less slippy.

They will involve my writing and my focus and my health and some pretty deep crap. As I blog about it over the next few weeks, I'll accompany it with some of the most hopeful records I can find.

(If this all sounds dangerously like therapy-through-blogging, then welcome to Netloafer...)

If 2014 turns out as well as I hope, I'll be dancing around my hovel to the pulsating glory of Always Loved A Film whilst mentally crash-landing a plane with a blow-up doll, far far away from the wall-gnawing Lionel Blair dungeon.

Isn't it funny how our Gaslamp conversations turn into next-day blogging and tweeting? Seems to happen all the time.

Good to see 2014 is turning into the Year of the Focus, as well as the Year of Productivity and the Year of Deep Crap. We all need a bit of introspection from time to time and it sure as hell wasn't going to happen in 2013, what with all that Doge and Cyrus and Harlem Shakes.

But there is something to be said for not getting too hung up on missed opportunities - but actually to be grateful that there are so many opportunities and accept that some of them will inevitably be missed. As you said, you had a lot of good time in '13, as we all did. Perhaps all we need is a touch more structure to our lives...?

I'd actually written this a week or two ago, but it was a mess and perhaps needed the prod of meeting up last night to enable me to produce a readable blog post.

I tell you what is helping me focus more than anything: the fact that I didn't let the Chrimbo season reduce me to a quivering wreck of depression. Or rather, the usual depression is there: I'm just turning the quiver into a little jig.

I'm going to invent a viral meme for 2014. It's going to be a six hour video of writers getting some half-decent first drafts written...