Best electronic albums of 2018: Bruno Brookes eat your heart out 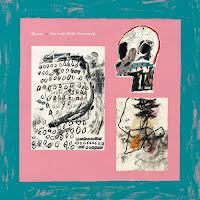 It's a bit weird writing all these side-bars amid a top 20 countdown. It's a bit like Bruno Brookes wandering off to his knitting circle in the middle of Top Of The Pops.

Anyways, here is the final bunch of electronic noodlers that didn't quite make my final list.

A jazz pianist and a cellist might not be natural territory for techno behemoth R&S, but Djrum’s Portrait With Firewood (R&S Records) produced some bass music on an epic scale. Elysia Crampton found a clattering joy in the balance between found sound and world music on Elysia Crampton (Break World Records). Mark Pritchard’s The Four Worlds (Warp Records) was worth it for the likeable washboard shuffle of Circle Of Fear. And Marquis Hawkes raised the flipping roof on The Marquis Of Hawkes (Houndstooth).

DJ Koze created a deserved fuss with Knock Knock (Pampa), a collection of twitchy house music but not as you know it. I was perhaps less keen on its folky elements. Chris Carter, of Throbbing Gristle repute, managed to funnel several decades of electronic music into the excellent Chemistry Lessons Volume 1 (Mute). Astonishingly, Mr Fingers dropped his first album for 24 years in 2018: Cerebral Hemispheres (Alleviated Records) was as soulfully slick as you'd imagine. HVL’s Ostati (Organic Analogue Records) revived many memories of old raves and armchair techno listening.

German glitchmeister Alva Noto gets his own paragraph. He brought us a minimal masterpiece with Unieqav (Noton) earlier this year, but he didn't stop there. His rare Newcastle live recording Live 2002 (Noton) with Ryoji Ikeda and the late Mika Vainio seemed to have its audience hair-spun with static. Also worth looking into is the architecture-inspired Glass (Noton) with Ryuichi Sakamoto: the pairs last work was The Revenant soundtrack with Leonardo DiCaprio getting jiggy with a bear.

Scroll all of the best 2018 electronic albums by clicking here.