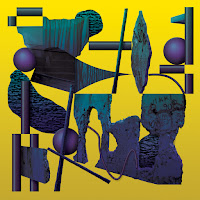 I think if I was to pick a nuclear family off the shelf, as if I was shopping at some kinda trafficking Ikea, I would pick:

(a) a robot child who would do all the washing up and chimney sweeping;
(b) a robot grandad who would puff a pipe all day long and grumble about what’s on telly;
(c) a robot creepy uncle who I would just keep in a corner with his hands where I could see them;
(d) a robot elephant who would—

Hold on, I’m getting sidetracked. What was I doing? Oh yes. The countdown for the bestest electronic albums of 2018.

Ross From Friends digs into his familial history to add heart to his debut album. It’s a wise move that lifts Family Portrait above the glut of usual house music albums.

The Knife sounds like Burial transplanted into a future century. Thank God I’m A Lizard, named after it’s opening bedtime prayer, is a wafer-thin house beat that lifts into heavenly jazz.

He allows vocal sprinkles to humanise the Four Tet-snappiness, whether that’s a soulful song or spoken snippets, and he’s not afraid to let a track break down into introspection.

It’s a grower. Like a robot family equipped with mechanical reproductive organs, let your love for this album multiply over time. And stop thinking about android willies. Stop it.

Scroll all of the best 2018 electronic albums by clicking here.