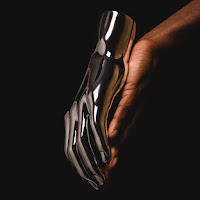 Darren Cunningham's work can be difficult to hook into, but there are some pumping nuts-and-bolts house moments here, and, on Fantasynth. a truly AFXian vibe. The more you listen, the more it works.

It's nice to have him back - he pretty much had everyone thinking he had retired. For this surprise comeback album, he says he was inspired by Blade Runner, Rammellzee, and Gabriel Fauré’s Requiem. I'm pretty one of those makes shaving products.

Oh and it's pronounced 'Azid'.