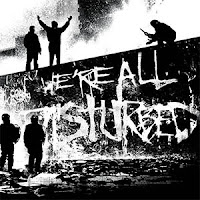 I once found myself on a patch of shadowy wasteland in Manchester. A boy-racer car pulled up: its rear window rolled down. A drug-skinny tough lad called me over. I'm dead, I thought. Or they're going to use me as a cocaine mule and stick things up my bum.

"Here mate," he said. "You look like Johnny Vegas." And they drove off cheering. This, my dear readers, is urban Manchester, raw in tooth and claw. Track-suited lads making comedy comparisons to bewildered strangers. Brutal.

Primarily consisting of epic rollers around – and beyond – the ten-minute mark, We're All Disturbed is one of the boldest albums I've heard in 2019, and if I hadn't discovered it so late in the year, it would no doubt be further up my list. And by the way, that lad totally looked like an emaciated Al Murray.