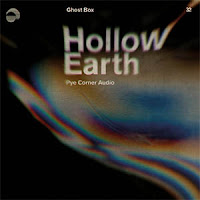 This bundle of vintage synth twiddling sounds like the soundtrack of a 1970s science fiction TV drama that's not yet been written. I'd star in it, of course. I'd be, er, Chief Roland Alien Policeman and I'd be in charge of policing aliens.

I'd get to wear a police hat, of course. Hollow Earth deserves its own police hat. There's something distinctively Tomorrow's World and Radiophonic Workshop in the wavering chords and pillow-soft production. Here, have a hat, you excellent album.

It's like a big hug. The way the analogue arpeggio meets a barely-present choir on title track Hollow Earth. The way the bass pulses in the tantalisingly dramatic Mindshaft. The way the album later breaks down into cotton wool ambience.

Yes, I'd totally be brilliant at acting in the science fiction television show that doesn't exist but probably should because Hollow Earth is a cracking listen from start to finish. Chief Roland Alien Policeman. CRAP for short.

No legit embeds available so here's something from YouTube: