Best electronic albums of 2019: one 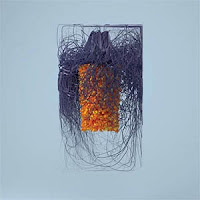 I've plopped on about Plaid on this website many times in the past. They're no stranger to this end-of-year listing, appearing at number three in 2011, at number six in 2014 and at number two in 2016. In 2019, they finally take the title of Best Electronic Music Album of the Year. Congratulations, boys, you did it. You can finally retire. Pipe and slippers.

Polymer is modern Plaid's masterpiece. In recent years, they've tended towards the pastoral, but now they've descended into a valley of darkness. They've scuffed their shiny bits, sandpapered their synths, creosoted their balls and given melody a good old duffing up. It's spiky enough to deter casual listeners, but if you don't mind a few scrapes during repeated listens, it's their most rewarding album for many years.

As the synthetic hairiness of their album artwork suggests, this work is a true polymer: part organic and part android. Los squeaks and snarls as if snapping at the bars of cage and yet it's bedded by the blinking lights of robotic synth patter. The disembodied vowels of Ops spill from some unknown belly but when the track soars, its chimes skitter with clockwork regularity. The detailed patter of the beautiful Dancers is both flesh and machine in extremis.

Each track has its 'thing', as each tangled motif stretches its shoulders. Drowned Sea gets so het up, at the three-quarter mark it collapses into sparkles. All To Get To Her quickly locks into a classic looping Plaid pattern. The shuffly Nurula revives The Bee's nifty guitar-work from The Digging Remedy. And Dust is their version of a lullaby despite ubiquitous synth blaps constantly threatening to bite off your hand.

So many times during Polymer, I find myself holding my breath as the band raise Hitchockian levels of tension, and they know exactly when to press the release valve. Only on the percussive attack of Recall does there seem to be no hope, but even that track melts into ambience after two minutes, which makes sense in the context of the album's softer second half. It all fits.

Best of all, this is a Plaid album that feels angry, raising their complicated post-IDM noodlings to the heights of justified emotion, and in turn adding even more heart to the more traditional Plaid melodics. I don't need to tell you the reasons to feel furious in 2019, but I'm glad this album was here for some psychosynthetic succour.

Thanks for reading this mega list, and for reading my blog in 2019. Fifteen years and counting! Scroll the full best-of-2019 list here.